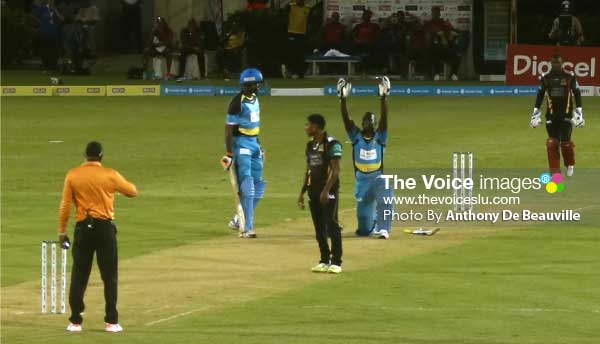 Share this post
DAREN (note the new spelling of his name) Sammy’s Zouks pulled one back on Thursday in their climb up the CPL ladder, but will need another victory against the Barbados Tridents today.

The Zouks relegated the St Kitts Patriots to the bottom of the ladder with a 35 run victory at the Daren Sammy National Cricket Ground on Thursday and now must overcome the Tridents currently sitting in third place on seven points and then second place Guyana Amazon Warriors on 10 points tomorrow.

It’s a tall order but if home advantage had anything to do with the Zouks’ win on Thursday, they would need two more doses of the same to pull through.

With a small crowd at hand for the start of play, the Zouks batted first and quickly lost opener Andre Fletcher in the second over to a brilliant diving catch from West Indies under -19 player Alzarri Joseph. The home team despite the fall of Fletcher’s wicket they were still able to get off to a very brisk start thanks to 25 runs from just 14 balls from home boy Johnson Charles.

The strongly built Charles’ was looking in excellent touch on his home ground, but suddenly miscued a pull shot off Alzarri Joseph that went straight to a fielder right in front of the newly named Johnson Charles Stand.

The fall of Charles’ wicket left the Zouks wobbling at 39 for 2 at the start of the fifth over. The run rate was good at the time, but having lost both openers they were in danger of losing that momentum that they had built thanks to Charles’ big hitting. That danger became a reality when Shane Watson was out for 15 off the bowling of Jonathan Carter.

Michael Hussey and David Miller attempted to do a rebuilding job. Then Sammy came in and hit a timely half century , 59 runs from 35 balls as the Zouks reached 174 for 9 from their allotted 20 overs.

This was Sammy’s first Hero CPL half century and came on a particular memorable day .

The Patriots’ batting has been inconsistent this season and they needed a good start from their top order . Evin Lewis and Lendl Simmons didn’t come to the party as they were both gone inside the batting Power Play with the Patriots reaching 46 for 2 after six overs.

The Zouks continued to apply pressure in the middle overs as the run rate kept on climbing; at one point they needed 13 per over. Smuts was finding the odd boundary here and there, but fell attempting to hit a ball from left arm fast bowler Delorn Johnson over long on and only managing to find a fielder.

When the Zouks captain picked up the wicket of the hard hitting Devon Thomas the crowd went wild. At that point the Patriots were reduced to 73 for 4 in the 10th over; but captain Faf du Plessis and Jonathan Carter added 50 runs and seemed set to take their team home when Carter slipped mid pitch going for a run and was run out for 21. Then Brad Hodge fell and in quick time the Patriots’ last hope of victory was gone.

Sammy’s success in captaining the West Indies to the World T20 title has resulted in theBeausejour Cricket Ground being renamed after him. A stand at the grounds has also been named after Charles. This was formalized before Thursday’s match.

Speaking at the short ceremony before the match, Sports Minister Lenard Montoutesaid he firmly believed that this naming ceremony did justice to Daren and Johnson’s achievements throughout their cricketing careers noting that cricket remained the primary tool that binds Caribbean people. He said the region’s success on the field of play and more recently in the ICC World T20 tournament in India earlier this year, only “served to remind us of how powerful a medium it is. The immense sense of pride in watching our sons of the soil play with distinction, is an experience that will stay etched in our minds for a very long time”.

Addressing Sammy personally, Montoute said it was not by chance that the last two tournaments won by the West Indies male team had been under his astute stewardship. “It is certainly not coincidence that the prominence of another St. Lucian cricketer in the person of Johnson Charles to West Indies fame is a consequence of the path you have created.”

The Minister added: “It is this capacity to mould, motivate and inspire that will be the biggest legacy that you will leave. You both have served as role models and leaders with our country at a time when we need such personalities. You have and will continue to shape the minds of our youth giving direction and meaning to them. They can relate to. They love you. We all do”.