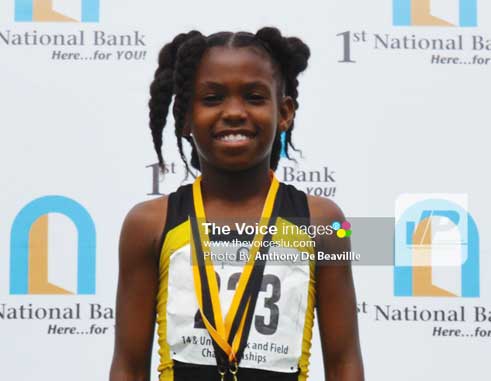 Competing under the St. Lucia Teachers’ Union banner, Team St.Lucia was in action on Friday and Saturday against some of the regions best athletes between the ages of 8 and 14 years from 11 other territories at the AO Shirley Recreation Grounds in Tortola, British Virgin Islands.

While in the BVI, team St.Lucia competed in 20 events. Naomi London competing in the girl’s Under-11 division won the bronze medal in the 100 metres dash with a time of 14.14 seconds, behind Jamaica’s Chennel Thompson in 13.73 seconds and Barbados’ Shonte Morris in 13.83 seconds. She also captured a silver medal in the 200 metres race, winning heat No.2 in 28.56 seconds; while finishing fourth in the Cricket Ball Throw.

St.Lucia won its fourth medal at the championships when Yannick Letang competed in the boys Under-15 Shot Putt. His throw was 11.56 metres, behind Bahamas’ Joseph Daxon 13.02 metres and Barbados’ Nathan Crawford-Wallis 12.91 metres.

When the dust was settled and scores tallied – Jamaica won the boys team title and the overall team title by mere four points, with Barbados second. Barbados won the girls team title, with Jamaica second. St. Lucia was ninth in the girl’s standings, 11th in the boys, and 11th overall at the championships.

London was third overall with 18 points in the individual standings. She was also the joint point’s leader in her division, with Jamaica’s Chevauna Grant, while Zoe Dorville was seventh in her division and 19th overall.