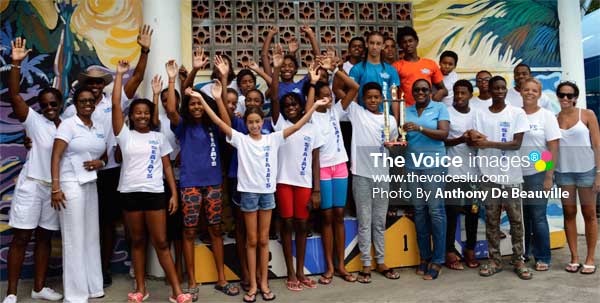 Sea Jays mopped up a total of 831 points to win ahead of arch rivals Sharks (739 points) In third place was Lightning Aquatic (489 point), and fourth – was Southern Flying Fish (290 points).

In the boys category Sharks showed their prowess as they amassed 457 points, 131 points clear of second place finisher Sea Jays on 326 points and third place Lightning Aquatic on 240 points. But it was sweet revenge for Sea Jays ladies as they went on to top the women’ s points table with 467 points; – a massive 227 points ahead of Sharks on 240 points and Lightning Aquatic third on 223.

Meanwhile, also at the weekend St. Lucia’s top competitive swimmers were in for what can best be described as a pleasant surprise as they prepared for the opening of the Karen Beaubrun Swim Meet. Awaiting the swimmers were the full complement of St. Lucia’s athlete all set for the Summer Olympics in Rio Janerio, Brazil scheduled from August 5 to 21.

Accompanying the athletes was Permanent Secretary in the Ministry of Youth Development and Sport, Dr Anthony George. The Olympians spent time talking to, socializing and giving encouragement to the young swimmers.

Certainly the Olympians did not come empty handed as they presented St. Lucia Olympic Tee Shirts to 12 swimmers who have represented the island on the international scene. Olympic high jump qualifier JeanelleScheper also had a few motivational words remembering her early days of swimming and being coached by Karen Beaubrun in whose memory the meet was held.