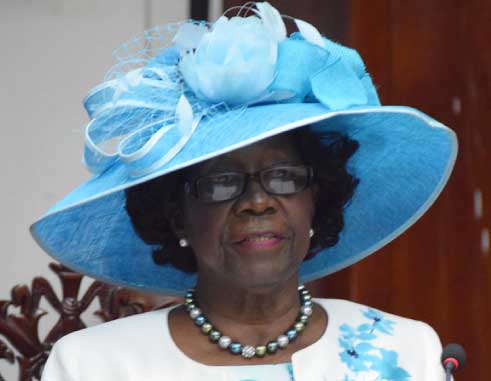 Governor General Dame Pearlette Louisy Tuesday said that contractual “arrangements” made prior to the June 6 general election by the former government were hindering the work of the new St. Lucia government.

Delivering the traditional Throne Speech at the opening of the new Parliament, Dame Pearlette made reference to the renewal of contracts of political consultants hired by the former Kenny Anthony administration prior to the elections.

She told legislators that while the new government of Prime Minister Allen Chastanet expected and was prepared to deal with the socio-economic challenges following its success at the polls, it did not anticipate having to consider making huge payments to political consultants as a result of having their contracts renewed.

“My government will not be deterred by challenges, but we have found that arrangements were entered into by our predecessor on the eve of an election.

Dame Pearlette said the financial burdens imposed by these arrangements are being assessed and the need for appropriate legislative measures to protect citizens from such arrangements in the future will be explored.

The decision by the former government has been widely discussed here since the election, with human rights lawyer Mary Francis calling for the resignations of those involved.

Francis warned that the convention, which has not been applied in this part of the world, where political appointees have had their contracts extended before a general election, can create absurdities at the highest level, making reference to the misfeasance case brought by the former government against Prime Minister Chastanet.

In her Throne Speech, Dame Pearlette said that the new government has already initiated discussions with regional and international institutions to assess the country’s finances to determine the rate at which the value added tax (VAT) will be reduced.

“We wish to express our appreciation to the Eastern Caribbean Central Bank, the Caribbean Development Bank, the World Bank and the International Monetary Fund who are assisting us in undertaking this exercise. It is expected that my government will be in a position to announce the new rate of VAT before the end of October 2016,” she added.

She reminded legislators that the Estimates of Revenue and Expenditure for the current fiscal year were tabled and passed in Parliament by the former administration without presentation of the policy considerations that informed those estimates.

“My government finds it necessary therefore to undertake a comprehensive review of those estimates in order to determine their realism and how they affect the priority issues in health, education, justice, national security, social safety nets and other areas, which we believe must be tackled in the short and medium term in order to bring economic and social stability first of all, and ultimately return our country to a path of sustainable economic growth,” she said.

Dame Pearlette said the government will then present the revised estimates informed by the new policy priorities for the remainder of the fiscal year.

However, she noted that the real manifestation of the new policies to be implemented by the new government will begin to take effect in the next fiscal year 2017 / 2018.

In addition, there will be an increase in the school transportation subsidy and school feeding programme starting in the new school year in September.

Meanwhile, legislation to facilitate the introduction of the amnesty on hospital bills and the reduction in vehicular licence fees will be tabled at the next sitting of Parliament in August, and the freeze on the payment of taxes on residential property will be implemented in the next fiscal year.

“While the measures just outlined are intended to bring some short term relief to our citizens, fixing the structural problems which we face, and creating a more efficient system for the attraction of foreign investment, will inevitably take longer.

“The specific investment projects geared towards creating sustainable jobs will be announced when my government makes a presentation to Parliament on the economy,” the Governor General said.

During her address, she made reference to the decision by Britain to leave the European Union, telling the Parliament there are lessons to be learnt from that event.

Britons last month voted by a 52-48 margin to quit the EU after 43 years and Dame Pearlette said the decision is already showing signs of negative impact on the entire globe, as the value of the pound sterling has decreased.

She said this alone will make it more expensive for British tourists to visit the Caribbean and will also impact negatively on remittances that flow throughout the Caribbean.

But she said the most important lesson from Brexit is that governments must listen to their citizens.

“If this had happened, the outcome could have been very different,” she said, also in an apparent reference to the outcome of the last general election here.