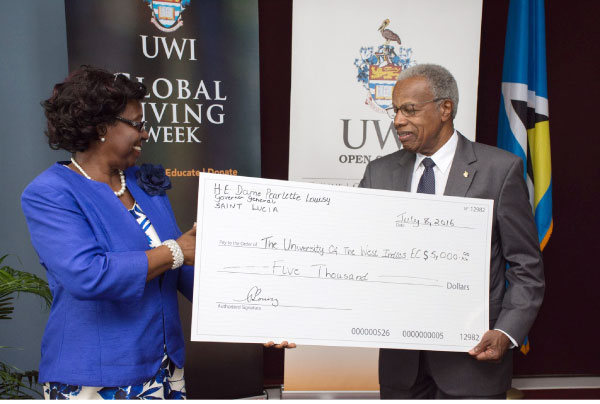 IN an effort to accelerate its drive for self-sufficiency, The University of the West Indies has launched a Global Giving Week (August 1-7, 2016) initiative under the theme, “Emancipate, Educate, Donate.” Initially launched at The University’s Regional Headquarters in Mona, Jamaica on Friday April, 8 2016, a series of similar launches have since taken place at other UWI campuses and indeed throughout the diaspora and beyond. It marks the beginning of what is hoped will become an annual tradition to connect with friends and cultivate support to strengthen The UWI’s capacity to drive regional development.

On Friday July 8, The UWI Open Campus Saint Lucia added its support to the initiative when it held its launch under the patronage of Her Excellency, Dame PearletteLouisy, Governor General of Saint Lucia. Attending the launch also was Sir George Alleyne, Chancellor of The UWI, Dr Luz Longsworth, Pro Vice Chancellor and Principal of The UWI Open Campus, Dr Gale Rigobert, Minister for Education, Innovation, Gender Relations and Sustainable Development, and Dr Ubaldus Raymond, Minister in the Ministry of Finance deputizing for Prime Minister, Allen Chastanet, who was off island and unable to attend.

Brief introductory remarks by Head of Site, Dr Veronica Simon, underscored the role of The UWI in the region and set the tone for a wonderful morning spent in the company of UWI alumni, friends, well-wishers and donors. Dr Simon’s remarks were followed by an official welcome delivered by Chancellor, Sir George Alleyne, who gave a powerful rallying call to all UWI Alumni to support the work of our regional University which had given birth to leaders in all spheres across the entire region and indeed the world.

An impassioned message from Professor Sir Hilary Beckles, Vice Chancellor of The UWI followed. The virtual format of his address did not, in any way, diminish the powerful message he delivered. Exhorting Caribbean peoples to take collective responsibility for their freedom and development, Professor Beckles called on the University’s community of graduates and supporters to participate in The UWI’s Global Giving Week programme and in particular to “give generously to our scholarship and Endowment Funds for students in need of assistance…so as to strengthen and expand the emancipation mission we all imagine for our youth”

Professor Beckles was followed by Her Excellency, Dame PearletteLouisy, outstanding UWI alumna and Patron of the event who, following her own eloquent appeal for support, led by example and donated EC$5,000.00 to the cause. Her Excellency’s generous donation was followed by several others including an EC$10,000 donation by Eastern Caribbean Financial Holdings (ECFH), EC$5,000 from Dr. Winston Paris, EC$2,500 from the local UWIAA chapter, EC$2,000 from the St. Lucia Teacher’s Credit Cooperative and US $2,000 from the Staff of Invest St. Lucia. Pledges from a number of other individuals and organisations were also received.

Following remarks by Mr Nickson Barry and Ms Lydia Dariah, Student Guild Chair and Official Contact of the local UWIAA Chapter respectively, Pro Vice-Chancellor and Principal of The UWI Open Campus, Dr. Luz Longsworth, delivered the official “Call to Action.” Dr. Longsworth made a passionate appeal to alumni, well-wishers and others to give generously.

“We can do this” said Dr Longsworth “but we must do it together. This Global Giving campaign is the start of that movement to join hands with our alumni and friends … this is not a begging campaign; this is the start of a revolution of how we take charge of our destiny in this region. As The UWI does groundbreaking research in medicine, sports, marijuana and other agricultural innovations, we need to ensure its sustainability for centuries to come. Like the founding fathers we have to imagine the unimaginable, we have to plan for the unknown; we have to anticipate the unexpected. The Global Giving campaign is one way in which we can all become a part of that unimaginable future.”

Dr Longsworth’s address was followed by an exquisite rendition of the University Song “There is a Light” by alumna, Mrs ElrayErmay – Glasgow. The event culminated with a brief reception.

The UWI Open Campus Saint Lucia received a total of EC$29, 876.40 in commitments at its official launch and this initiative will continue through August 1-7 and beyond.