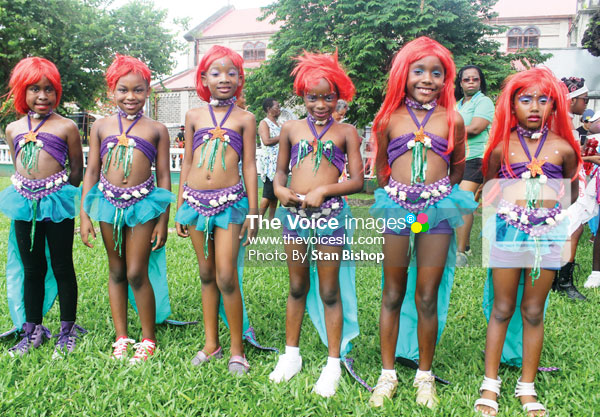 Just Us Kids was the largest of nine bands that competed this year with nearly 250 children jumping up in the eleven sections portraying the theme, “Fancy Sailor: Catch of the Day”.

Just Us Kids also made a clean sweep in the Individual of the Year category: Amelia Charlemagne won with “Starfish”, Vivianne Calderon placed second with “Spadefish” and NyaGustave came third with “Red Snapper”.

In the Queen of the Bands category, Just Us Kids’ Nyla Alexander won with “Pot Fish” (for her third consecutive win in that category) while fellow band member, KioniAkufoo placed third with “Splendour of Dolphin”.

Just Us Kids’ Limarni Lewis captured the King of the Band title with “Fish for Sale” while fellow band member, Jesse Cornibert placed third with “Something Fishy”.

This is the seventh win for Just Us Kids Carnival Band, the band having won its first title in 2008 followed by six straight wins from 2011 to 2016.

Band leader, Barry George, said that while he is elated at Sunday’s big wins, the real credit must go to the full Just Us team who put in many long hours and great effort to get the band ready for the season.

“The season was short, but we were really pulling together to ensure that we got everything done in time,” George told The VOICE. “A great deal of thanks must also go to our sponsors, parents and our junior revellers.”