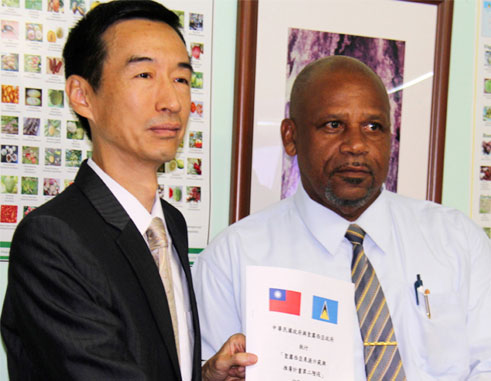 This took place on Monday at the Ministry of Agriculture, Fisheries, Physical Planning, Natural Resources and Cooperatives. Signatories were Agriculture Minister Ezechiel Joseph and the Taiwanese Ambassador to Saint Lucia Ray Mou.

On January 12, 2016 the Taiwan Technical Mission officially handed over the project to the agriculture sector marking the completion of phase one of the project which began in 2011 and ended in 2015.

The project forms part of the mutual cooperation which continues to exist between the Government of Saint Lucia and the Government of the Republic of China on Taiwan. It is designed to improve on the quality and quantity of selected fruits and vegetables for the domestic market. The crops selected for the project were: watermelon, cantaloupe, papaya, pineapple, tomato, sweet pepper, cabbage lettuce and cucumber.

The project focussed also on the introduction of new crop varieties for Saint Lucia and the adaptation of improved technologies which would help increase revenue to the producer while diversifying the agriculture sector and creating food security for the local economy.

During the implementation of the first phase of the project, the following objectives were met:
• The establishment of three demonstration plots to showcase the cultivation of new crops and the use of improved varieties
• The hosting of 19 training workshops and five Farmer Field School sessions to help build capacity among producers in the cultivation of new crops with the application of improved technologies. These capacity building exercises benefited approximately 1045 producers.
• The training of 11 agricultural officers through extensive capacity building programmes for the transfer of relevant technologies.
• The building of nine compost houses to demonstrate the making and use of compost to help promote organic farming.
• And an expansion in the cultivation of selected crops, namely: watermelon, pineapple, papaya, cantaloupe and tomato.

Ambassador Mou spoke highly of the outcome of the project since its initiation in 2011, saying it had established a solid foundation with the targeted crops by improving production on the ground. By building the capacity of agricultural officers and producers and through the transfer of technology, he said, it was expected that an increase in both quality and quantity of the targeted crops will be realized in Saint Lucia.

As a result of the success of the initial phase the government of Taiwan has committed an additional $2 million towards a second phase which will assist in the diversification of the local agricultural sector over a three year period.

Minister Joseph expressed gratitude to the government and people of Taiwan for their continued assistance in implementing another successful project in Saint Lucia and for the overall collaboration that exists between the two governments.