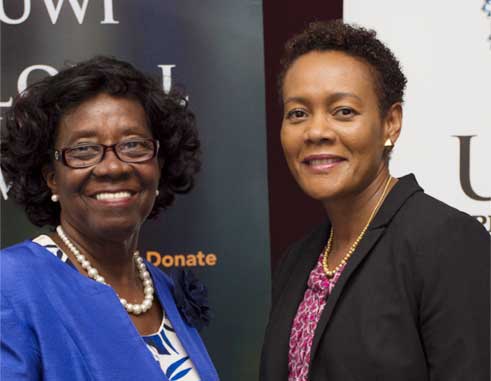 THE East Caribbean Financial Holding Ltd. (ECFH) has partnered with the University of the West Indies (UWI) on the launch of its “UWI Global Giving Week” Fundraising Initiative with the sponsorship of EC$10,000.

The launch took place last Friday at Government House under the patronage of Governor General Dame PearletteLouisy, who is also an alumna of the University. Ms. Joanna Charles, ECFH’s Chief Operations Officer was in attendance for the symbolic hand over to the Chancellor.

UWI Global Giving Week, which is slated for August 1 – 7 is a major fundraising initiative undertaken by the University under the theme “Emancipate. Educate. Donate.” to continue to build on its solid foundation of higher education in the region.

The University of the West Indies has been a pillar of the Caribbean engendering growth of leaders of the day and development across the region.

The ECFH Group said it remains committed to supporting development programmes and was pleased to be associated with this new initiative undertaken to advance the progress of the University.

The Group pledged support to the development of the UWI Open Campus programmes in Saint Lucia.

It said: “ECFH views this contribution as a sound investment in youth development, in keeping with the values espoused in its Corporate Social Responsibility philosophy. The Group encourages private individuals and companies alike to participate in this important initiative”.