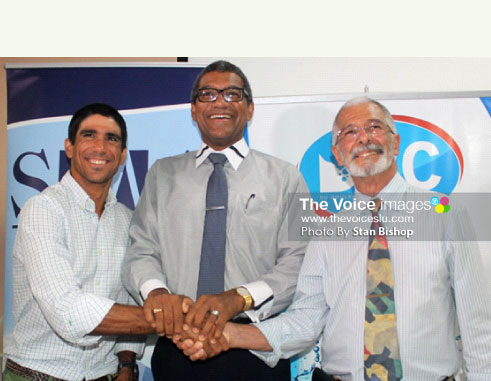 Share this post
AFTER more than a year in discussions, officials from Windward & Leeward Brewery Ltd. (WLBL) and Du Boulay’s Bottling Co. Ltd. (DBC) say they are closer to a merger that is expected to make both companies more competitive.

The ceremony began with President of the St. Lucia Manufacturers’ Association and General Manager of DBC, Richard Du Boulay, expressing the company’s delight in receiving the Investor of the Year Award from the Caribbean Export and Development Agency (Caribbean Export) in Miami last May.

The bottling company, headquartered on Bridge Street, Castries, began in 1972 as a small, modest operation. Today, the company has all but dominated the local bottled water and soft drink market. Du Boulay said four decades of level-headed entrepreneurial spirit have paid off.

“We employ the latest technology and production techniques, creating efficiencies to staff training and development for production and quality standards,” Du Boulay said. “DBC, to date, has attained the highest standards possible within the Latin centre business unit regionally and globally in HAACP, ISO 9000, ISO 14000, ISO 18000 and FSSC 22000.”

Du Boulay said the company is among the five top-ranked countries in the Latin centre business unit in terms of product quality and packaging, competing against countries such as Mexico, Ecuador, Jamaica, Haiti, Dominican Republic and Trinidad and Tobago, among others.

He thanked both the SMA and former Minister for Commerce, Emma Hippolyte, for lobbying on behalf of the soft drink manufacturing sector, resulting in the implementation of Article 164. That Article allows LDCs to make a request to the CARICOM Council on Trade and development (COTED) to suspend as a “temporary measure” preferential treatment usually granted to products of other CARICOM member states, in order to promote the development of a specific sensitive industry in the LDCs.

Over the years, the bottling company has won other for its excellence in manufacturing, including seven awards at this year’s SMA Quality Awards where it received – five diamonds, trophies, one platinum and the Minister’s Award for Innovation.

DBC’s Managing Director, Dunstan Du Boulay, said winning the Investor of the Year award was one of the proudest moments in the company’s history. The company, he added, beat out 28 other regional companies in that category.

“This achievement is as a result of years of dedication, determination, hard work and tremendous sacrifice,” Du Boulay said, adding that the company has never declared a dividend in three decades but instead ploughs back its profits toward the growth of the business.

Du Boulay said the company is now the premier bottling operation and supply point within the OECS, adding that business is expected to boom after the pending merger becomes final.

“Last week, we signed a document to proceed with the merger of the two companies, Windward and Leeward Brewery Ltd. and Du Boulay’s Bottling Company Ltd,” Du Boulay said. “We felt like this was an ideal opportunity to bring this to the attention of the public because these two companies have been established in Saint Lucia for over 40 years.”

He added: “We decided to pursue this direction in an effort to really insulate us from predatory activity so as to make the companies stronger and the working environment more secure and stable and to ultimately preserve those companies.”

Now one of the island’s largest manufacturers, WLBL began operations in Vieux Fort in 1975, producing Heineken Beer. Since then, its portfolio has grown tremendously with the company now producing and distributing over 15 alcoholic and non-alcoholic beverages, including the world-famous, award-winning Piton Beer.

WLBL has a wide distribution network, one of the many pluses DBC will benefit from should the merger be successful.

Sanchez said talks between WLBL and DBC began just over a year ago and gained traction based on the elements of family values and service to community, qualities that both companies endorse.

Sanchez said the tentative merger would help both companies become stronger and competitive locally, regionally and internationally. However, nothing is final at this stage.

“The deal is not yet confirmed,” Sanchez noted. “There are some formalities that need to happen in order for that to be confirmed.”

Minister for Commerce, International Trade, Investment, Enterprise Development and Consumer Affairs, Bradley Felix, applauded DBC for its tenacity to remain in a business environment that has seen many family businesses shut their doors due to the effects of globalization.

“While many challenges continue to impact the business sector, such as economic shocks, it is commendable that you have indeed weathered the storms and can today celebrate this momentous occasion,” Felix said.

Felix added that he was aware of some of the problems the business sector faces, particularly with shipping and other logistic matters, access to finance, e-commerce and other business transaction issues. The minister said attempts will be made to address the situation as part of government’s bid to improving the ease of doing business.