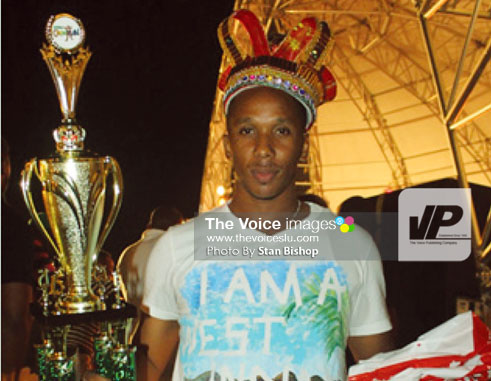 Share this post
At 25, Arthur Allain has already made a remarkable contribution to the arts in Saint Lucia via his musical talents. So much so that he has even surprised himself with the list of achievements he has racked up thus far.

But as bright as his star might be, it took years of painstaking struggles and a knack for capitalizing on opportunities for Arthur to win two back-to-back groovy soca titles and the people’s praise.

The Soufriere native said he has had a close relationship with music for as long as he can remember. While growing up, his father, Glen, owned a sound system on which he played music of different genres every weekend. Arthur usually just sang along to the music, never really taking it seriously.

However, Arthur’s interest began to take on a different shape while he attended Soufriere Comprehensive Secondary School where his teacher, Christopher Fevrier, challenged the students to write songs and come up with their own music as part of class projects.

“That pretty much gave me the knack to write my own music,” Arthur told me.

Later, when Arthur was around 12 years old, he and two friends, Christus Gill and Dwain George, formed the group, SOS (or Sounds of Soufriere), writing songs and participating in singing competitions at the school. Not content with getting that far in music, the trio began recording their material in their home studio, eventually uploading the videos to MySpace.

In 2007, Arthur messaged former StarQuest winner, Emrand Henry who, by that time was quite established in the music industry with a simple request; Henry is also from Soufriere.

“I reached out to him and told him that I would like to come into the studio and do some work with him,” Arthur said. “Surprisingly, he responded and told me that he had checked out my songs and liked the vibe. At the time, I was actually a rapper.”

Henry sent Arthur a song he was working on at the time and asked Arthur to pen a verse for it, which the latter did. The song was never released but Henry was impressed enough to introduce Arthur to Gilbert “Gilly” Cooke and Patrice Regis of Lynx Studio, who were also impressed with the youngster.

Christopher Hunte would later pen Arthur’s first track, an R&B ballad entitled “Just Enough”. Things were moving at a rapid pace for the young musician and fate intervened in 2008 when Matrix Band, which rehearsed near his home, was desperately looking for a vocalist.

Having seen Arthur perform at SCSS the year before and noticed him hanging around their rehearsals, the band members made him their vocalist. Another opportunity presented itself when Arthur did backup vocals for QshanDeya at Soufriere Jazz. Arthur soon performed with the band at shows during the 2008 Carnival season.

“At the time, I was very inexperienced,” Arthur admitted. “So it was pretty much a tough challenge for me. The crowd did not take to me at all. I think they probably saw this skinny young guy trying to be all hyped with soca. It was a bit tough but as the years progressed, I became more experienced.”

Arthur continued to release new music, dropping “Turbulence” in 2009. He later teamed up with Benje while performing with the band. After parting ways with Matrix Band, Arthur and two other band mates – Gus d’Auvergne and Yannick Plante – formed EvaLucian in 2013. Shaquille Walker, Gideon Alcide, KC Aurelien and Sir Lancelot joined the band afterwards.

After Arthur placed second in the Groovy Monarch in 2013 with the song, “Jumping Alone”, EvaLucian’s profile increased significantly as the band got more exposure. In fact, the band opened the Saint Lucia Jazz & Arts Festival a year later and performed at Soufriere Jazz and carnival shows. They also shared the stage with internationally-renowned artistes like Kassav.

In 2014, Arthur’s “Numb” won him the first of his two Groovy Soca Monarch titles, catapulting Arthur and EvaLucian to another level.

Arthur has worked with songwriter, Dan-yelle Du Bois, since 2013. She has penned “Jumping Alone”, “Numb” and “(Who I Am) West Indian”. Du Bois said the duo’s journey started four years ago when they attended teacher’s college. She was very much interested in writing back then, often walking around with a big black book.

Du Bois said she would often ask her father, radio personality Michael “Dr. Beat” Du Bois, to get her into a studio where someone could sing her material. Arthur, she said, was the catalyst to having her wish come true.

Du Bois said she’s eternally grateful to Arthur for giving her the chance to get her music out. The partnership, she added, has also helped both of them to develop, adding that she was able to become more confident at her craft.

“As the years went by, I’ve gotten many opportunities to write and direct, all because of the platform I was given. We are actively talking about concepts and ideas and we try to focus on content,” Du Bois explained.

Arthur, too, is grateful to Du Bois, especially when he spoke about the song, ‘West Indian’, which, he said, gave EvaLucian a greater platform since the song speaks about being West Indian, qualities that include having a party. More opportunities to travel also materialized, with the band being invited to Trinidad to perform at many shows there, including live performances at television and radio stations.

“(Who I Am) West Indian” was later remixed as “I Am A Saint Lucian” and used as the anthem for the 2016 Independence activities. Arthur said the song continues to create opportunities for him.

“Whereas ‘Numb’ might be a more popular song at parties, ‘West Indian’ (and the remix) have served to position me as an ambassador, really. It has gotten me many deals with different companies,” Arthur explained.

Despite Arthur and Dan-yelle not working together on material for this year’s competition song, “Dat Beat”, she remains his manager. He has also teamed up with Kiedel Sonny of EvaLucian Entertainment to work on the visuals for the song.

Arthur’s work has also attracted the attention of the Saint Lucia Association (Texas) which honoured him for his contribution to the arts in Saint Lucia. The Soufriere Regional Development Foundation (SRDF) also recognized the young musician for his stellar work thus far.

Arthur admitted that he’s not a very big fan of power soca, saying that that form of soca has changed so much to the point where the tempo is so fast that it is no longer as danceable as before. The music itself is not as musical with the chords and diversity as before, he added.

“I’ve kind of taken a back seat on power soca because I can better relate to groovy soca since I’m more of a singer who can blend my melodies and add different styles to them,” Arthur explained. “So I gravitate more to groovy soca. However, I will not say that I will not do power soca anymore.”

The young star also plans to compete in the International Soca Monarch in Trinidad by next year, saying it’s a great platform for him to expose his talents to a wider audience. For now, though, he’s hoping to release more music after the Saint Lucia Carnival season to target Trinidad Carnival. If his music is able to transcend to that market, he said, he would enter the regional competition.

Known for making a big splash at the Groovy Monarch, just what are Arthur’s plans for this year’s competition scheduled for tomorrow?

“We’re looking to come out really hard,” the two-time monarch said. “This might be my last year competing, so I want to go out on a high level by, hopefully, winning the title and being the first person to win it three consecutive times. So that’s one of the objectives for this year.”

By taking a break from competitive groovy soca locally, Arthur would be joining former monarch, Teddyson John, in taking a back seat and freeing up the platform for other artistes. He believes that having done it has served its purpose for him, and he is grateful to the soca competitions for the chance to make his contribution.

“Without it, I don’t think I would be where I am today. Winning it has exposed me to Saint Lucia on a whole. So any artiste who would like to get into the competition would be doing the right thing. Get in there, establish yourself and after it has worked for you, use that experience to create better avenues such as doing your own shows and tours and releasing albums. Just spread yourself around the world,” Arthur explained.

Arthur said part of his decision to take a break from competitive soca is so that he can go on tour to perform and promote his music to bigger audiences. He is currently on contract with the Ministry of Education and has one year left which he spends at Balata Government Combined teaching music to students from Grade K to Grade Six. He previously taught at Soufriere Comprehensive Secondary School before moving to Castries.

Other struggles, such as sourcing finances, are all the more reasons why Arthur is deciding to bow out of competitive soca. The amount of money an artiste invests is so exorbitant that even after winning, they often do not realize a profit. While the prize money for Groovy Soca Monarch was doubled to $20,000 this year, Arthur hopes it continues to increase.

“It’s a huge strain on the artistes when they have to pay for recording, video productions, presentations, and so on. Last year, I spent almost $10,000 to put on my performance at Groovy Monarch. However, the prize money for the winner was $10,000,” Arthur lamented.