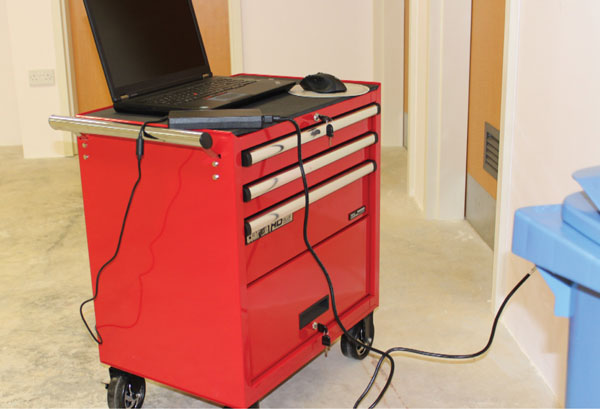 UP to six container loads of equipment and furniture earmarked the Owen King EU Hospital (OKEUH) were destuffed on the grounds of the new hospital revealing high-end tools, supplies and equipment from Unit Export, one of the suppliers for OKEUH.

As Saint Lucia eagerly awaits the official opening of the new hospital, detailed planning, procuring, installing, testing, and training have been ongoing at the facility. Work on the ground is expected to intensify in the weeks ahead as up to fifteen more containers, from five contractors, are scheduled to arrive on island in the coming weeks.

Claudio Meirovich, Technical Assistance Supervisor for the Owen King EU Hospital provided details as to some of the items received thus far and what is expected from the other contractors.

He said: “All the furniture in terms of cupboards and everything that has to be hang on the walls has arrived. All the tools for the maintenance team have also arrived and in the next couple of weeks and months we are going to be also getting all the clinical furniture, surgical tables, delivery beds, hospital beds as well as specialized equipment. We’re going to get EMT equipment, ophthalmology equipment and all that is going to be coming in next month. Right now it’s a very interesting time for us in the supervision because everything is coming in, we’re starting to instal things and we’re starting to move really fast.”

Meirovich expressed his excitement with this stage of the project while stating that preparatory work such as the testing of medical gases and water lines which are required for some of the medical equipment will also be completed in coming weeks.

He added: “I am very excited about this because we have been working on this a lot, for the past four or five years. It’s been a long time and we had several challenges to get over and as I say we can see light at the end of the tunnel already.”

Project Engineer at the OKEUH, Wendell Bernard said contractors alongside the technical team at OKEUH have been extremely busy for the past two weeks, including weekends, ensuring all equipment and supplies from the various containers are placed within the respective rooms in this massive facility.

Bernard stated that the challenge is to ensure that minimal damage is done to the facility while receiving and distributing all the equipment and supplies from the various contractors.

“You are going to get walls being scratched as you move with equipment and boxes about the place. We have a few cleaners and the maintenance team from VH and persons we’ve hired to assist with maintenance on the project site. So on a daily basis they would monitor the contractors moving the equipment and direct them as to the way to clean it, what they are going to use to clean it and help coordinate things so that we won’t have too many of these issues happening as they go along. We’ve been telling them, protect our floors, protect our walls, keep doors opened so we won’t get your pallet jacks and your trolleys jamming into doors.”

The project engineer said the Owen King EU Hospital is touted to be one of the best health facilities in the region.

“It’s like an envy for even the first world countries what we have here, the construction of the hospital itself. What the persons from the European Union have blessed us with is equipment to complement that and what we’re seeing is a lot of new stuff coming in from our shelving to store medication, tools to help maintain the place. I am very excited seeing that coming in and even more excited to see that approach our team is taking in ensuring the safety of it.”

The OKEUH is expected to be opened later in the year.