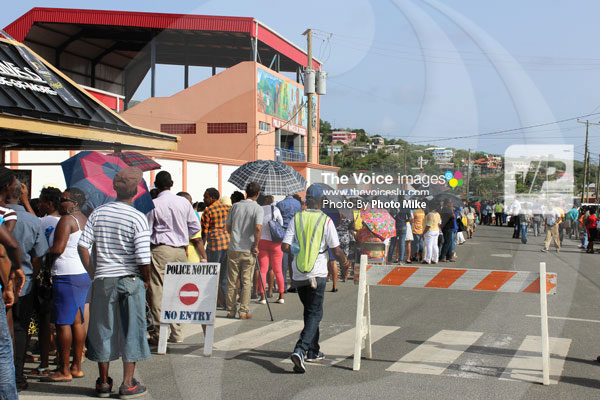 SARAH FLOOD-BEAUBRUN, the Castries Central Parliamentarian, is the only one of the 11 successful United Workers Party candidates in the June 6 general elections who is not part of the newly formed Cabinet of Ministers.

She declined comment when asked about her exclusion. However, the omission has and continues to generate discussion on social media and elsewhere about available positions that she may be appointed to.

Unconfirmed reports state that she may be up for the position of either Speaker of the House of Assembly, a position she held before, Deputy Speaker or probably Attorney General, on account of her profession. She is an attorney.

The Ministers were sworn in and took the oaths of office Tuesday night, eight days after general elections in which the then ruling party, the St. Lucia Labour Party went down in a stunning defeat.

The ceremony was held, for the first time in the country’s history, outside the capital Castries, in Vieux Fort.

Hundreds of the party supporters and invited guests filled the Phillip Marcellin Grounds for the swearing in ceremony, which was carried live on both radio and television.

The new look Cabinet of Ministers has a membership of 15 which includes three of the four women who contested the elections under the party’s flag and a former Junior Minister in the past government of the St. Lucia Labour Party led by Dr. Kenny Anthony.

The list of Ministers and their portfolios is as follows: Allen Chastanet, Prime Minister and Minister responsible for Finance, Economic Growth, Job Creation, External Affairs and the Public Service.

Bradley Felix, Minister in the Office of the Prime Minister responsible for Commerce, Industry, Investment, Enterprise Development and Consumer Affairs.

Dominic Fedee, Minister in the Office of the Prime Minister responsible for Tourism, Information and Broadcasting.

Senator Ubaldus Raymond, Minister in the Ministry of Finance.

All appointments took effect on Tuesday.