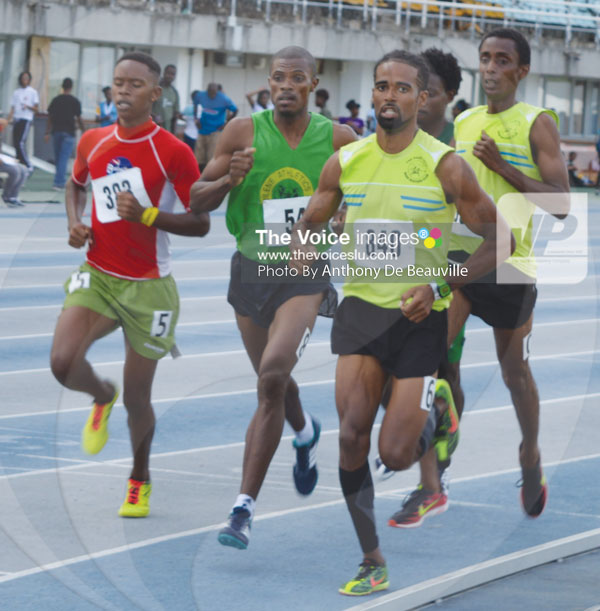 THE curtains came down on the St. Lucia Athletics Association’s National Individual Track and Field championships this past weekend at the George Odlum Stadium. A number of athletes had mixed fortunes over the two days of competition.

It was the first time in a very long time that St. Lucians kept an open eye on the ladies high jump and one could have heard the “Oohs” and “Aahs” when there was a failed attempt by the jumpers.

St. Lucia’s world ranked high jumper and Rio Olympic qualifier Levern Spencer was a class act on Day 2 when she set another first, when already qualified for Rio, she met the standards set by the IAAF of 1.94 metres to win gold ahead of Jeanelle Scheper another Rio qualifier who jumped 1.91 metres for the silver and Ashlee Chole 1.60 metres for the bronze.

With St. Lucia participation in the Olympics going back to Atlanta in 1996 and, no other St. Lucian has obtained the qualifying mark on local soil.

In the women’s 100 metres Julien Alfred ( Jamaica based / Survivors) achieved the gold when she finished in 11.77 seconds ahead of Pernel Joseph (US based / Abilene) in 12.16 seconds and Isha Blanchard (Pacesetters) in 12.37 seconds.

On day 2, Alfred showed her prowess in the 200 metres when she c

Another scintillating run on Day 2 came from Jovon Stephen (Nightriders) in the men’s 200 metres, Stephen won in a time of 21.58 seconds when he defeated a field that comprised Johnathan Celestine (Nightriders) 21.67 seconds, Marvric Pamphile (Choiseul) 21.79 seconds.

Among those who trailed the medal winners was Rosen Daniel (US based / Survivors) 21.84 seconds, Stephen Charles (Nightriders) 22.17 seconds, Delan Edwin (Blazers) 22.41 seconds and Corneil Lionel ( US base / Survivors) 25.32 seconds.

In the girls 800 metres, first across the finish line was Kamillah Monroque (Rockets) in 2 minutes 39.61 seconds. Monroque also won the 1500 metres in a time of 5 minutes 02.93 seconds, and also went on to win the girls 5000 metres to claim her third goal medal at the championship.

United States based / Survivors Marbeq Edgar had two eye catching victories at the championships; in the 1500 metres he stopped the clock in a time of 3 minutes 58. 12 seconds, ahead of Michael James another (US based / Road Busters) who finished in a time of 4 minutes 09.37 seconds, third was Tauri Augustin in a time 4 minutes 21.36 seconds. In the 800 metres it was all Edgar ahead of James and Augustin in that order, in one of the better events run on the day.