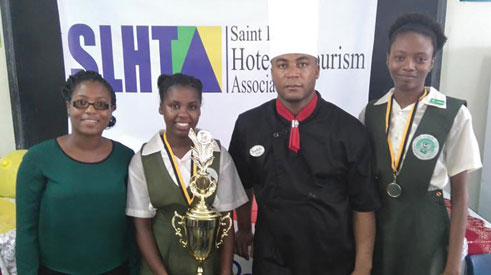 A competition with a difference, full of anticipation and excitement was this year’s cook off competition hosted by the SLHTA.

The event catered for a small studio audience made up of students, teachers and parents who came out to cheer and show support for their respective culinary teams.

The SLHTA Chefs in Schools Competition is an annual cooking event which targets Food and Nutrition students of orms 3 to 5 who are passionate about cooking and desirous of a career in Culinary Arts.

Adopting a similar format from Barbados’ Caribbean Junior Duelling Challenge, students fought their way through two rounds of competition including the Signature /Freestyle round and Mystery Basket round.

After the first round of competition which included all the six participating schools, only three schools made it through to the second round. Corinth, Soufriere and Ciceron Secondary Schools presented the most impressive dishes and it afforded them a place in the finals, which was the mystery basket round.

After 90 minutes to discuss, prepare and present their dishes with the excitement and buzz from the audience, the teams astounded the judges with beautiful and flavourful dishes.

The champion dish, presented by Megan Felicien and Michaela Poleon of Ciceron Secondary School was:
Cornmeal and salt fish crusted red snapper with a Tania croquet and apricot compote
Megan and Michaela will be traveling to Barbados in two months’ time to represent Saint Lucia at the Caribbean Junior Duelling Challenge.