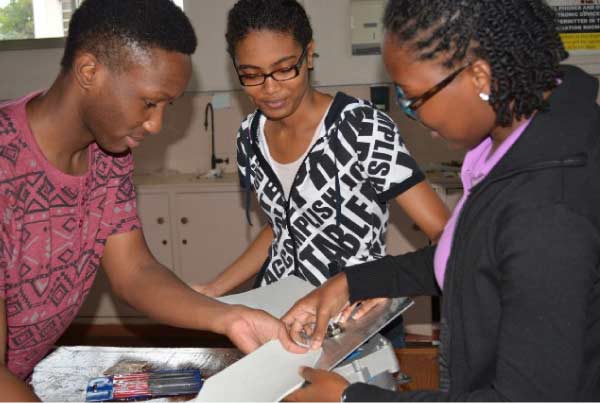 FOR gifted Saint Lucian science students, the national avenue to showcase their skill is the Science and Technology Fair organized by the Ministry of Education with sponsorship from the St. Lucia Electricity Services Limited (LUCELEC).

This year, LUCELEC contributed $10,000 to the event that was held in March. The long-standing partnership between the Science Fair and LUCELEC has also led to the company paying the admission fee of a Saint Lucian student chosen for the Student Programme for Innovation in Science and Engineering (SPISE) organized by the Caribbean Science Foundation.

SPISE is an intensive four-week enrichment residential summer programme for Caribbean high-school students. It is designed to harness science and technology for the diversification of the economies of the region and is held every summer on the University of the West Indies (UWI) Cave Hill campus in Barbados.

And although a relatively young programme, the Saint Lucians who have attended to date are already blazing trails. They include RavindraMangar and Kesan Samuel who were the first Saint Lucians to attend the programme which began in 2012. Kesan Samuel earned the Most Improved Calculus Student Award when she attended SPISE and will begin attending the University of Connecticut later this year. Mangar is now engaged in an internship organized by the SPISE programme at BossaNova Robotics in Pittsburgh, Pennsylvania. He has also applied to several top US universities, including the prestigious MIT.

In 2013, two Saint Lucian students were chosen to attend SPISE. The first was Chris Jean-Baptiste whose enrolment was sponsored by Barbados Light and Power through their relationship with LUCELEC. The second applicant was Gaius St Marie who was too young and therefore deferred to 2014 when LUCELEC paid for his participation. St. Marie is currently in his first year at St. Mary’s University in Halifax where he is pursuing a degree in Biotechnology. Earlier this month, he received a Chemistry Award during his college’s 8th annual Chemistry Awards and Recognition Reception.

Excellence is also the order of the day for Quilee Simeon, who was the LUCELEC-sponsored participant in the SPISE Internship Programme in 2015. Simeon is currently completing his final year at the Division of Arts Science and General Studies at the Sir Arthur Lewis Community College where he has maintained his position on the Dean’s List. And while he will take a year off from school to work before applying for university, the SPISE programme has secured him an internship at Foursquare Rum Distillery in Barbados over the summer of 2016. Simeon is interested in a career in neuroscience or biochemistry.

The curriculum at SPISE includes university-level courses in calculus, physics, biochemistry, entrepreneurship and Caribbean Unity. Students also participate in a career seminar series where they hear first-hand about the career paths, decisions and experiences of eminent professionals in science and engineering from the diaspora and the region.

A former Math professor, Education Minister Dr. Robert Lewis has lauded the SPISE programme and has commended LUCELEC for sponsoring the tuition of Saint Lucian students accepted into the programme.

“LUCELEC has consistently been the main sponsor or contributor and I really want to thank LUCELEC for this because [SPISE] is opening doors to young, talented science students in the region to go to Cave Hill during the summer to engage in additional work,” he says.

Eleven Saint Lucian students have applied for SPISE 2016 to be held from July 16 to August 13. LUCELEC has already committed to sponsoring the chosen student. Twenty students from around the region are expected to attend this year’s programme.