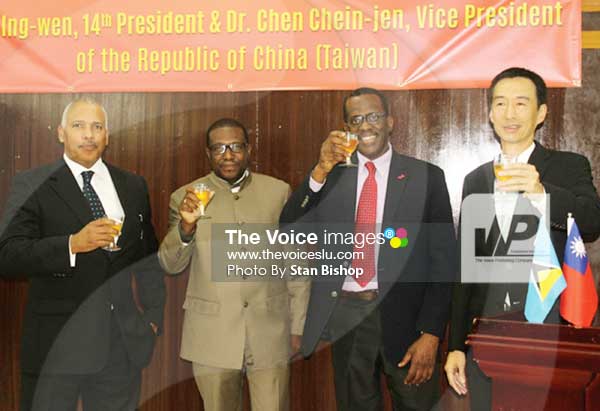 TAIWAN’S Ambassador to Saint Lucia, Ray Mou, says his country’s commitments to Saint Lucia remains solid despite the change in the presidency tomorrow.

The ambassador’s assurance came during a reception held at the Orchid Centre at Union last Thursday in celebration of the inauguration of Taiwan’s new President, Dr. Tsai Ing-wen and Vice-President, Dr. Chen Chien-jen.

Ambassador Mou said the incoming Taiwanese president has repeatedly made public statements expressing the importance of continuity and stability, including fostering close relationships with all of Taiwan’s diplomatic allies.

“Taiwan will not only honour existing commitments to Saint Lucia but will also engage actively with the people of Saint Lucia to identify new opportunities in the sectors of education, culture, investment and bilateral trade,” Ambassador Mou said.

Ambassador Mou said Dr. Tsai’s commitment to keeping the status quo as it relates to Taiwan’s foreign policy is expected to become more varied, resulting in projects that will be mutually beneficial to that Asian nation and its 20-odd international allies.

“President-elect Tsai also indicates that it is to Taiwan’s interest to make more contributions to international society, either through official channels or non-governmental avenues, including our young generation, our business leaders and civil society in subjects such as disease prevention, disaster relief and technology sharing,” the ambassador explained.

Deputy Prime Minister Phillip J. Pierre expressed gratitude to outgoing President Ma Ying-jeou for the relationship he formed with Saint Lucia when he visited the island in August, 2013. He said Saint Lucians appreciate the strong bonds of friendship developed between the two countries over the years and hope they continue, especially in the area of training Saint Lucians at Taiwanese universities.

“These students are studying various disciplines, including engineering and medicine, and when they come back, apart from being fluent in your language, will make a contribution to the development of Saint Lucia,” Pierre said.

Pierre also thanked the Taiwanese government for providing funding to the Constituency Development Fund (CDP) which has seen hundreds of Saint Lucians being gainfully employed through developmental projects.

Minister for External Affairs, Alva Baptiste said President Ma cemented the bonds of friendship between the two countries during his visit here two years ago, “setting the stage for us to move expeditiously into a new era to establish a new covenant between Saint Lucia and Taiwan.” Baptiste added that Taiwan’s support to Saint Lucia was no trivial matter.

Baptiste said the opening of Saint Lucia’s embassy in Taiwan last year demonstrates the seriousness with which the government regards the bilateral ties with Taiwan. That embassy, he said, would be used as a hub to promote trade in Asia and administer assistance to Saint Lucians studying in Taiwan.

Meanwhile, a team of four government officials left Saint Lucia last Monday for Taiwan where they will attend the inauguration ceremony of Dr. Tsai. That team will be led by Minister for education, Dr. Robert Lewis, Speaker of the House of Assembly, Peter Foster, Cabinet Secretary, Darrel Montrope and Administrative Attaché to the Prime Minister, Calixte George, Jr.

The local delegation leaves Taiwan for Saint Lucia this Sunday.