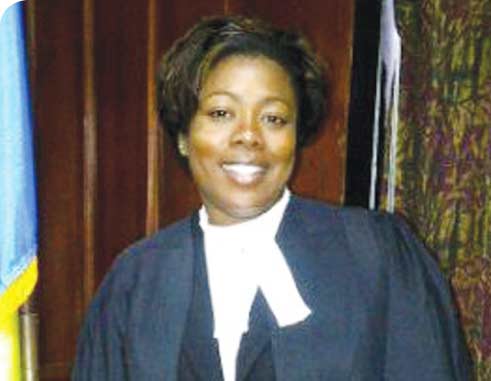 All across the globe, there are unsung heroes who, on a daily basis, do all that they can to help those most in need of it but can’t or simply don’t have the means to help themselves.

Today I’m going to shine some light in the shadows on a WOTW who is one of those undercover heroes.

Samanthia George-Frederick is a 41-year-old Attorney at Law who currently holds the post of Director of Legal Aid Authority for the Ministry of Legal Affairs.

Now I’m sure one can only imagine what it must take to do such a job but luckily, the Massacre resident shies away from nothing and takes on her job with no fear or hesitation.

The Legal Aid Department is a government department that was set up in 2011 to provide services of an attorney to citizens of who are unable to afford legal advice and assistance.

When asked why she chose such a particular profession, George-Frederick said; “My job gives me the opportunity to serve those who are underprivileged and need those legal services just as much as the affluent client. With this department many who may have sat on their rights or may not have any form of legal redress can be assisted there and know that after all there is light at the end of the tunnel. For this reason, I have chosen to remain within the public sector as opposed to being a private attorney.”

See, I told you that she was a hero or in her case, a “Shero”, passing on the opportunity to make mega bucks to help the “little guy”

The attorney said what’s disheartening is that there are many challenges that come along with the job and whilst that is expected, she is not talking about the challenges that one would expect: “Currently the authority’s biggest challenge is staffing. There is only one attorney and that is myself while the demand for legal aid in Saint Lucia grows. I am therefore stretched as I have to attend to every legal aspect which comes to the office.”

George-Frederick said there is nothing more that she would love than to see a fully functional office with a few more attorneys…at least two more as well as support staff. At the moment, the office assists with unrepresented defendants in the criminal courts. This of course is in addition to her gargantuan work schedule.

You would think that a woman who was able to carry seemingly the weight of the world on her shoulders alone would have no such thing as fear in her body, but alas, she is human and so her big secret that hardly anyone knows is that she is claustrophobic.

“I am afraid of tight spaces, and as a result it limits me in certain areas. I cannot go under a bed. oh no, I feel as if it closes in on me. I cannot get into an elevator on my own and lastly I’ve been a driver for 24 years and I have never parallel parked and that’s because I have a great fear of tight spaces.”

As human as this makes her, in my opinion, she is no less super than a person without a fear in the world.