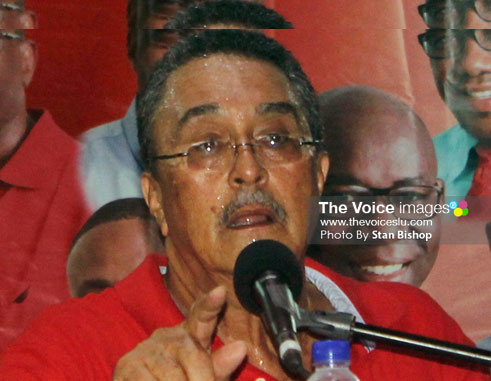 Share this post
TACKLING the high unemployment rate will remain paramount on the Saint Lucia Labour Party’s agenda should it be given another term in office, Prime Minister Dr. Kenny Anthony said last Thursday evening.

Speaking at an SLP public meeting held on the Castries Market steps where he addressed hundreds of supporters, Dr. Anthony said his administration has brought the unemployment rate down from 24.5% to 20%. His party, he added, intends to create jobs via various means, including more government-financed construction and the construction of an additional 2,000 hotel rooms.

“There is still work to do and so it will continue to be our number one priority,” Dr. Anthony said.

Dr. Anthony said that at the end of this year, government would have spent $100.139 million to create jobs, adding that the next five years will see more jobs being created via the largest programme of public works ever undertaken in the country, including the Gros Islet-Dennery Highway and feeder roads for agricultural communities.

The Prime Minister also outlined his party’s top 15 pledges aimed at elevating the socio-economic conditions of citizens. These include:

• Reducing unemployment to below 15%
• Linking Gros Islet and Dennery via the developing of a major highway along the island’s north-east coast
• Increasing the personal income tax allowance from $18,000 to $30,000
• Bringing more tax relief to pensioners
• Assisting parents in financing the children’s CXC fees from this year
• Financing a Tertiary Education Trust Fund at $3 million per year
• Building a new police headquarters
• Building a new dam on the Troumasse River
• Ensuring that Saint Lucia has a vibrant, robust and resilient economy
• Implementing universal health care (UHC)
• Transforming the Sir Arthur Lewis Community College (SALCC) to a university college
• Achieving complete energy dependence by 2035
• Rejuvenating Castries by converting the city into a duty-free cruise destination
• Transforming the agricultural sector, focusing on new value-added products such as nutraceuticals and organics
• Enacting legislation to protect the Queen’s Chain

The SLP’s 15-point plan for the economy came one week after United Workers’ Party (UWP) Political Leader, Allen Chastanet, outlined that party’s “5 To Stay Alive” plan that proposes a reduction and eventual removal of VAT, a 50% reduction for vehicle licence fees, doubling the school and transportation subsidies, an amnesty for fees owed to Victoria and St. Jude hospitals, and removal of personal property tax for three years.

One of the most contentious campaign issues concerns the UWP’s intention to initially reduce and ultimately remove VAT. The Prime Minister said the UWP’s plan to do so will create a huge shortfall in government’s revenues which currently realizes an annual intake of $346 million from VAT receipts.

Through the introduction of VAT, Dr. Anthony said Saint Lucia was able to remain out of the clutches of the International Monetary Fund (IMF). Nevertheless, he admitted that the VAT regime, which came into effect on October 1, 2012, needs strengthening.

“We believe that because we introduced VAT, (that it) works,” Dr. Anthony said. “Yes, there are weaknesses in VAT (and) we will have to correct things as we go along the way. But it has worked.”

During last Thursday’s public meeting, the Prime Minister announced June 6 as the date for general elections, with nominations day set for May 27.