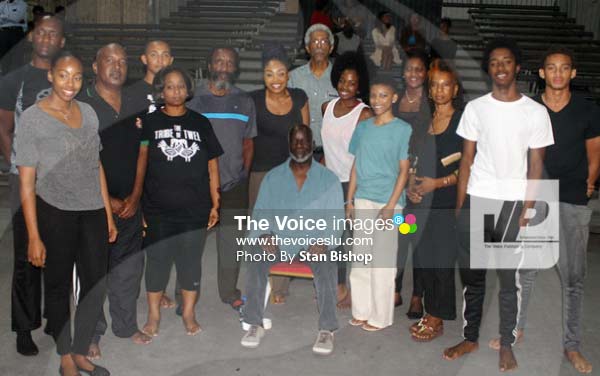 PLAYING the role of Geoffrey the English butler on the popular American sitcom, “The Fresh Prince of Bel-Air”, which ran from 1990-1996, Joseph Marcell has somewhat become typecast as the servant who goes above and beyond his call of duty. The entire Banks family drew on his knowledge from time to time, especially during family crises.

Lately, however, Marcell has been playing an almost equal role in passing on his knowledge to some veteran and novice actors in his native Saint Lucia where he recently performed Sir Derek Walcott’s seminal poem, “Omeros”, at two shows which formed part of this year’s Saint Lucia Jazz & Arts Festival. (Prior to his trip here this month, he was part of the cast of the Shakespeare’s Globe Theatre’s production of “King Lear” which played here in August 2013).

Last Monday’s workshop at the National Cultural Centre included 14 participants reading excerpts from Shakespeare’s “Julius Caesar” and Sir Derek’s “Omeros” while 25 audience members learned a thing or two vicariously. Marcel taught the participants the importance of proper breathing and engaged them in vocal and coordination exercises. It seemed clear that the humble servant had no favourites among the group, seasoned or not.

“I simply attempted to give everybody a fair crack and tried not to allow for presumptions,” he told me later during an interview. “It had to go as it’s been set out, so everybody starts at the same level. Once a participant gets intimidated by somebody else’s experience, the whole thing falls apart.”

While the Cultural Development Foundation (CDF) and Saint Lucia Tourist Board (SLTB) billed the three-hour session as a master class, Marcell said he preferred the term “workshop” because “it was not about demonstrating what the thing should be, but actually allowing people to discover in the process what it ought to be.”

“This allows the participants to think for themselves and use their own imaginations. So nothing’s right and nothing’s wrong; yet, of course, the strictures of the verse are what they are. But it allows people to enjoy it. Acting is a fun job. It’s not about pulling your hair out; it’s about being relaxed and receptive. That’s what I attempted to do (during this workshop),” the 67-year-old thespian explained.

Although he’s referred to as a Shakespearian actor, Marcell said he does not believe the title is apt since playing those roles are just one of many aspects of his profession. He also does modern, American and Caribbean plays, and quite a bit of Shakespearian plays. Accomplished as he has been thus far in his career, he still manages to hold on to his modesty.

“I’m told I’m very good at it,” Marcell joked. “So I must be because they want me to do it all the time. But I wouldn’t flatter myself to say that I’m a classical actor. I just do classical plays. Thank God that at my age they still want to employ me.”

Marcell described his performance of “Omeros” as “one of the most wonderful, challenging and frightening moments of my life”. Although he had performed it previously at Essex University and The Globe about two or three times, he said performing in Saint Lucia was like “a complete coming home not least for Sir Derek himself”.

“I mean, “Omeros” is like his major work for which many people know him and which won major awards. So you have to come in and essay it in its rightful place. It was a wonderful challenge and a terrific honour. Never in my wildest dreams would I have imagined I’d be doing that,” Marcell, who left Saint Lucia for Britain at age 9, said.

Marcell will be in Los Angeles this month-end for a few theatrical productions there. He believes that the scarcity of theatrical productions in Saint Lucia and their inability to draw audiences lie in schoolchildren not getting the opportunity to see plays and hear music and recitations. The veteran actor added that entertainers should visit schools often to give children a sense of how nurturing the creative arts can be. That way, he said, an audience can be created, resulting in a culture where people see the arts not only as a hobby but as their bread and butter.

“An audience for music is much easier because you just have to turn on the radio and there it is. An audience for theatre has to be developed. The country needs to develop children’s theatre, theatre that goes to the children. If you instruct the children and they begin to understand theatre, then they also develop an appreciation for it. So they’ll want to go to the theatre. It’s not something you can force people to do; it’s something that you have to build and develop.”

Marcell also had some nuggets of advice for actors: “The only advice I can give is that people keep their eyes on the prize. Do not let anyone cheapen your experience. Simply pursue what you want to pursue as absolutely steadfastly as you can.”

Natalie La Porte, who has been acting for the past 16 years, was one of the participants in Monday’s workshop. She said that upon finding out that she would be part of the workshop, she had a few jitters, due in part to the global acclaim Marcell has. Despite having a few training sessions in Shakespearian plays before, she said she later overcame her fears and insecurities with the hope of learning something new from the master thespian.

La Porte is one of the island’s leading actresses. She has appeared in plays such as “Mary Can Dance”, Adrian Augier’s “Troumassee”, Sir Derek’s “Haitian Earth”, “The Odyssey” and “The Joker of Seville”, to name a few. While she has participated in several acting workshops throughout her career, Marcel’s workshop was somewhat different, especially Marcel’s humility.

“Every teacher has a different idea of how you grasp the material, just as how every director has a certain process,” La Porte said. “But Joseph Marcell came down to our level and did not forget that he’s also an actor. So he wasn’t intimidating, which made me feel great because I was a bit nervous at first. I think he was probably looking forward to learning from the process. So I think it’s very important that he was inclusive and down-to-earth like that. He even makes you forget that he’s such a huge star.”

Travis Weekes, Lecturer in Drama at Sir Arthur Lewis Community College (SALCC), was also among the actors selected for Marcell’s workshop. He described the session as a refresher course, adding that participating in the workshop reinforced the importance of continuous training, especially for young people.
Weekes said the session also reminded him of his student days at the Jamaica School of Drama where he did a course entitled “Voice and Speech”, taught by Jamaican actress, Leoni Forbes, who was also trained in England.
“She was very strict in terms of how meticulous we had to be and the time it took to get things like enunciation, articulation and interpretation right. Marcell did a lot of that with us tonight, so that really brought back memories. But even more importantly, it reminded me of how crucial it is for actor training, which we don’t do enough of in Saint Lucia,” Weekes said.

Teenager Jonathan Bruce said he has been acting for the past four years, taking acting seriously for the past two and a half years since doing Theatre Arts at the CSEC level. He said the workshop had got him immersed even deeper into his craft.

“The workshop was certainly an eye-opener because a lot of things were uncovered for me,” the youngster said. “Some aspects of things I thought I really knew about were delved into deeper. So it was definitely a learning experience.”

Bruce, who has never performed in any Shakespeare play thus far, said the workshop has inspired him to test his acting ability at the bard’s work. He also hopes that similar workshops will follow towards getting the youth becoming more engaged in the arts.

Like La Porte and Weekes, Bruce said being in Marcell’s presence was as mesmerizing as it was inspiring. But I wanted to know whether any of them felt intimidated by the international star’s presence and his wealth of knowledge that came out freely during the workshop. It turns out that, like Geoffrey the butler, the down-to-earth Marcell also knows how to work his charm and keep people at ease.

“I wasn’t as much intimidated as much as I was humbled from the second he started,” Bruce told me. “I could have sensed from his confidence and the manner in which he spoke that he knew what he was doing. Even if I hadn’t seen his work or never met or heard of him before, he had a presence that wasn’t intimidating.”