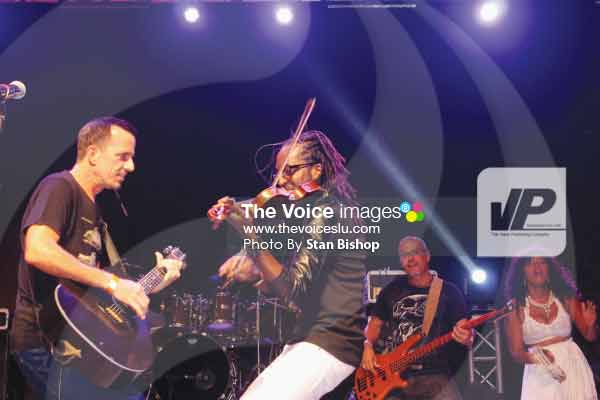 THE opening line to reggae legend Bob Marley’s song, “Trenchtown Rock”, goes like this: “One good thing about music, when it hits you, you feel no pain”. The line is repeated for emphasis before Marley literally begs with: “So hit me with music, hit me with music now”. The song has a groovy vibe that tends to erase any shadow of doubt we have about shaking off whatever negatives life throws at us.

The song has its roots in Trenchtown, a poor neighbourhood in Kingston, Jamaica where Marley grew up. When a hurricane ravaged the area in 1951, a dump site became ground zero around which Trenchtown was built. The themes of abject poverty and desperation of growing up in Trenchtown found their way into Marley’s hit song since music was his escape from the many social ills plaguing Trenchtown.

Music, it has been proven, can have a therapeutic effect on people, especially babies. Many people admit that to escape the closing walls of negativity and pain they often resort to forgetting their troubles and dancing, another priceless piece of advice Marley offers in another song, “Them Belly Full (But We Hungry)”. Such is the power of music, especially when it can make us reminisce the past, relish the present and bring us closer to the future.

But inasmuch as there was some great music at this year’s silver anniversary of the Saint Lucia Jazz & Arts Festival, other doses of it really made a lot of people feel some pain. From the opening show on April 29 when Jamaican dancehall artiste, Mavado, chose to give the audience a pappyshow instead of their dollars’ worth to season closer, Marc Anthony, failing to connect on a lingual level with many patrons, the festival’s gold anniversary in 2041 should definitely be in its planning stage as of yesterday.

Omi, Shaggy and Omarion also failed to hit the right notes with patrons who would have shelled out hundreds of dollars to be entertained by artistes billed as some of the planet’s best. At times, it seemed like the abovementioned five artistes were doing patrons a favour by even showing up on stage. Moreover, some of these artistes even thought that the audience should be the ones doing the actual singing.

Having attended only the official opening event, Teatime Jazz, Jazz On The Square, Monchy Mizik enKweyol, and Main Stage Friday through Sunday, the only foreign artistes at these music shows that really mustered my strength to be entertained and appreciate great music would be Lovindeer, Kes, Da’Ville, Arturo Tappin, Kassav, BWB, George Benson, Air Supply and Kool & The Gang. The others, I think, just made me feel like I was in the Twilight Zone waiting for my pizza to show up.

For an event that organizers told me as far back as last year’s festival that they did not want to overdo themselves back then and risk bursting this year’s bubble, the silver anniversary of what is billed as the premier music festival in the region was less than sterling as far as some of those foreign artistes’ performances were concerned. To paraphrase Marley, “Them pocket full but we hungry for a better performance”.

Aside from those highly-paid, disappointing foreign artistes who owe the event’s organizers and the patrons the sincerest apologies, there was a bright bunch of Saint Lucian artistes who seemed determined to rise above every latent intimidation from the big-name artistes by just shelling the place down. Although I reckon that between two and three of our homegrown artistes need some brushing up to do, they all came and earned the paltry paychecks they receive because the exposure they get supposedly makes up for the real pay they deserve.

I sense there must have been a conspiracy on the part of all those Saint Lucian artistes who albeit grateful for the generous opportunity provided them by the Saint Lucia Tourist Board (SLTB) over the years to showcase their talents, really stepped up their game and demonstrated that they have what it takes to make a festival shine.

The likes of Arthur Allain, Jessy Leonce, Black Sheep, Skip Monday, Michael Robinson, Alibi, Sedale, et al, strengthened my faith even deeper in our homegrown artistes who must sometimes wait for months to pick up a paycheck from show promoters throughout the year. They all deserve the support they literally beg for when they invite us to their shows. Kudos!

Notwithstanding the non-performance from some of those foreign artistes, the SLTB must be commended for a number of reasons. Firstly, it must take a great deal of effort and planning to keep a festival going for 25 years. Along those years would have been many pluses, including the inclusion of more Saint Lucian artistes as well as the arts component following a revamping of the festival a few years ago.

However, there were a few areas in which I felt the SLTB fell short:
• While there was an Arts Village at Massav Park, there was hardly any arts and craft items available at Main Stage, save for the Jazz Shop which sold festival memorabilia;
• There was no masquerade or Carnival element at Main Stage, which usually provides especially the foreign patrons a deeper insight into our cultural diversity. In fact, even the opening artistic sequence adopted some years ago for Main Stage Friday was scrapped. (And please don’t tell me those costumed models during Omi’s performance was enough!);
• Apparently, some – if not all – of the foreign artistes did not have air-tight contracts that detailed what the songlists for their sets would be. As such, some seemed to have made up their performances as they went along, especially Omarion. My thinking is that organizers would get to choose what songs the artistes perform based on the popularity of the songs here;
• There seems to be greater emphasis placed on the record numbers the festival attracted rather than on patron satisfaction. Truth be told, the larger the audience is for a poorly-executed concert increases the propensity for more people feeling shortchanged; and
• The festival booklets, which contained dates, venues, artiste lineup and times – as well as a nostalgic view of the festival’s past — were not available to patrons until the Main Stage leg of the festival. Seemed a bit rushed.

It would be unfair to suggest that all the effort that went into this year’s jazz and arts festival was in vain. Obviously, many people would have laboured for long days and nights scrambling to put things together in time to allow for a seamless event. They all must be commended for their hard work and dedication in ensuring that the festival continues to attract both the interest of the artistes and patrons and promote the island’s image as a viable destination.

But organizers need to do more work, especially in the area of artiste selection. I get the impression that we sometimes force some artistes to come here to perform, resulting in some of them taking a flight here just to take us for a meaningless ride. For the hefty sums these artistes are rumoured to be paid by us, I suppose it’s still not enough to give us those superb performances we see them give fans in Europe, North America and Asia. In this hard, dry dasheen season, paying artistes money we hardly have in return for performances that hit sour notes with us is abominable.

To those Saint Lucian artistes who had the good fortune of performing in this year’s Saint Lucia Jazz & Arts Festival, here’s a piece of advice for you. Know that the more we encourage you to raise your “A” game that you definitely have the talent it takes to surpass many of these international artistes that wear that chip on their shoulder about being the best but deliver way less than expected. Like many other patrons who saw you perform during the season, I am unequivocally proud of what I witnessed. Keep working at your craft and bringing us quality when it really matters. You and a few of the foreign artistes really did a great deal to save the festival from being a total drab.

Plans are already being made for next year’s festival with Fantasia (“Lose To Win”) and Beenie Man (“Gyal Dem Sugar”) among the lineup. Here’s hoping that they and the others hit us with some great music nothing less than fantastic and that the 2017 season does not leave a salty taste on our musical palates. After all, when great music hits us, pain should be one of the last things – according to Marley – that we feel. And, if you asked me, the past season is still giving us the gripes.