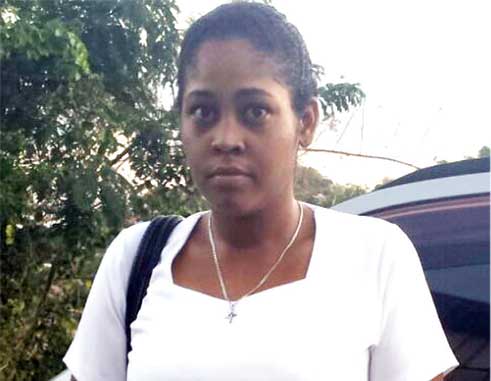 IMAGINE the power of having the lives of dozens in your hands daily. Now imagine the lives being those of children. Could you imagine the immense pressure one must be under to be in that position?

Well, today’s FITC holds that power and has given some surprising insight concerning that power and why in some ways, it is more difficult than one without the inside knowledge could imagine.

Roxanne Jn. Baptiste is a young and soft spoken registered nurse who has been working with the Paediatric Unit at the Victoria Hospital for the past three years.

Jn. Baptiste’s demeanour immediately feels calm and gentle which indicates that she is indeed in the best unit of the hospital, the ward where the little ones need full attention coupled with the patience and niceness to make them feel safe and comfortable.

Now if you’re a parent, especially with young children, you might want to pay attention to what Jn. Baptiste has to say because whilst some of her words are refreshingly reassuring, she made a couple of revelations that could make both your time at the hospital and her job just that bit easier.

Nurses on a whole, on a daily basis get a bum deal being the victims of abuse of all sorts.

In this day and age, one would have to question their sanity for choosing this profession, in my opinion, because who in their right mind will want to dedicate their lives to saving lives and healing the sick only to be the object of detestation as well as being exposed to a number of cons like disease, heartbreak, disappointment, frustration and the list goes on.

But Jn. Baptiste did a great job in opening my eyes to some of the pros of the jobs that by far outweigh the cons and make you realise that negativity aside, this job is well worth it and that anyone could do it regardless of age.

The VOICE: Why did you choose to work in the medical field?

Roxanne: I’ve always wanted to be in medicine from the time I was very young but I did not know what position I wanted to be in or where I would fit in. As I got older, nursing just seemed to fit me so it was easy to jump right in.

The VOICE: How did you end up in the Paediatric Unit?

Roxanne: I was placed there by a senior nurse who felt that I would be good as a paediatric nurse. When I got there, everyone said this was the best place for me because my personality determined it.

The VOICE: So far, what are your thoughts on that decision to place you in this unit? Do you think that it’s your calling?

Roxanne: I really do love it and I would even like to further my studies in paediatric nursing. So yeah, I think it was a good decision.

The VOICE: I could only imagine that it is not easy being a nurse first and foremost but working with children, what is that like?

Roxanne: A lot of people see it as being difficult but it isn’t that bad. Children are just little individuals themselves. They have spunk and a lot of personality. You must have patience and a calm demeanour because they pick up on your energies but apart from that, it’s pretty simple…it’s just like working with anybody else. The hard part is dealing with the parents…sometimes it’s harder to deal with the parents than the children but like I said, patience, in everything you do, you just have to be patient as a nurse and a caregiver

The VOICE: As difficult as children can be, it must be difficult to see some of them looking so frail and sickly at times. How do you manage to deal with them?

Roxanne: Sometimes I don’t even look at it as them being sick, I just look at it as me trying to help them get better. A lot of the times, it’s always good to see your patients walk out the door and they come and tell you “I’m leaving now, I feel so much better.” So at the end of the day, I don’t look at it as them being sick, I ask myself what can I do to make them feel better. Because a lot of the children are tougher than many people think. I find that children are very resilient and many of them have diseases that older people have; yet they cope really well.

The VOICE: What are some of the best parts of working in the Paediatric Unit?

Roxanne: It is interacting with the children, especially those who can speak to you and tell you how they feel…even those who can’t, just the smiles and the little jokes, even when they trouble you, it’s fun so it’s work but it can be a lot of fun as well.

The VOICE: Nurses get a bad rap for a number of reasons including having bad attitudes, being too slow or being incompetent in the public perception, how does that make you feel, knowing how hard you and your colleagues work to save lives?

Roxanne: It’s very difficult to be a nurse and a healthcare provider. We work in an institution which is short staffed and we always have lots of patients coming in, the turnout is great. We’re the main hospital on the island so you can imagine. Sometimes it can be difficult because I mean we all come from our individual homes and we all have our individual problems, not to say that we should pass it out on the patients but we are all humans. It is really hard to be a care provider especially when you have a lot of patients to care for, it might seem that the nurses are being a little difficult to the person in need of care. Because, as an outsider, you will see that you only have your mother or your child in need of care, but then the nurse is seeing that she has eight or ten patients waiting. So it’s more difficult for the nurses and sometimes, some people might think that they don’t work hard enough but they do work really hard and I think sometimes that they don’t get the credit they deserve. I mean, you can’t please everybody all the time so you just do your best and everybody is trying their best with the resources that they have.

The VOICE: To anybody considering a career in Paediatrics, what advice would you give to them?

Roxanne: Anybody who wants to do paediatrics from their heart, whether it’s a nurse or doctor, I think you should go for it whole-heartedly. They shouldn’t be deterred by any negativity. It’s a really enjoyable line of work to be in. the children give you motivation every day and whilst it can be difficult at times, as long as your heart is in it, it wouldn’t be as hard as you would think. Anybody young or old could do it because as you’ve probably seen before, sometimes people enter the medical profession in their 40s and 50s. We live in a time where you don’t have to be young to go to school so as long as it’s a passion of yours, I say go for it.