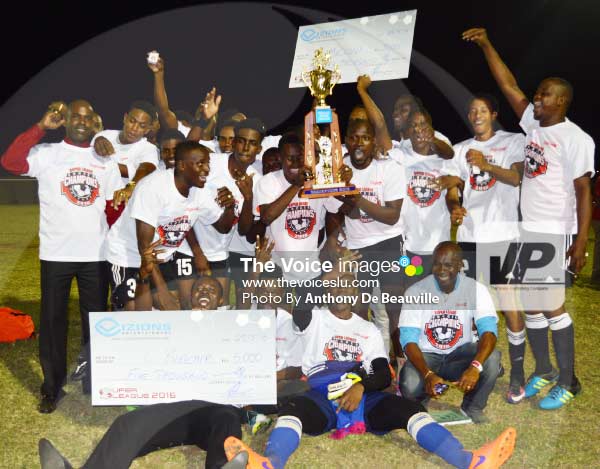 Share this post
MICOUD emerged champions of the 2016 Vizions Entertainment / St.Lucia Football Association Super League Football Tournament that concluded on Wednesday evening at the Phillip Marcellin Grounds with the staging of the tournament’s Grand Final.

The victory means that the eastern side became the first team to win three major football tournaments in St.Lucia in a matter of eight months: the Blackheart Knockout, the St.Lucia Football Association Fantasy Cup and now the Vizions Super League.

Before a capacity crowd estimated to be well over 4000 football fans at the PMG, Micoud achieved victory with a 5 – 3 margin in a penalty shootout over Vieux Fort South. VFS nosed ahead in the 8th minute of play when No.8 Nyrone Winter’s powerful right foot strike from just outside the box eluded the Micoud custodian Noah Didier to his right to the delight of the VFS fans. With one goal down and despite Micoud’s offensive VFS was equal to the task up until the halftime whistle of Referee Leo Clarke.

On the resumption both teams stepped up the tempo to the delight of the thousands in attendance with some raids down the flanks and accurate overhead passing in the midfield area.

Micoud with their crowd support behind them shouting “Let’s go Micoud lets go” and with that kind of energy coming from stands the equalizer was predictable but they had to wait up until the 74th minute when a No. 9 Mahonne James right foot low shot that eluded VFS goalie Leon Alexander. At that point this was all Micoud needed to send the game into the dreaded penalty shootout and with Didier between the uprights the writing was on the wall.

The eastern boys were on target on the night as they scored all of their penalty shots. VFS No.19 Jamal Descartes squandered his team’s second when his shot went wide of the uprights to send the pendulum in Micoud’s favour..

Meanwhile, for the third place silver ware Vieux Fort North defeated a highly favoured Babonneau team that never looked their normal selves on the square. The half time score was goalless, with both teams missing out on several opportunities.

On the resumption of play Vieux Fort North’s No. 9 Kervin Myers broke the deadlock when he scored in the 76th minute to the delight of the hundreds of VFN supporters. It was enough to seal the deal for Vieux Fort North.

The coach of the winning team Cornelius Butcher was also in the big pay out. He collected $5000.00 for his winning effort. Vieux Fort South’s No.8 Nyrone Winter was the MVP of the tournament, while female Dail Joseph was the lucky patron / football fan on the night when she won the $7500.00 everybody was after.