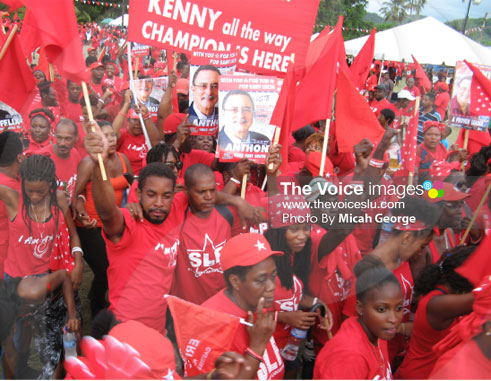 SLP With Advantage But UWP Has Momentum.

THE ruling St Lucia Labour Party (SLP) and the main opposition United Workers Party (UWP) are neck and neck in popularity going into next Monday’s general election, according to a poll published yesterday by Caribbean Development and Research Services Inc. (CADRES) of Barbados.

The poll among 1,000 persons interviewed between May 20 and 23 gives the SLP a one percent lead over the UWP in committed voters, 34 percent to 33 percent with 30 percent of “Uncertain voters”

CADRES said its poll had a margin of error of plus or minus 5 percent which was consistent with other surveys it had carried out in St Lucia and across the region.

One point of interest is that the poll was conducted before Prime Minister Dr. Kenny Anthony’s latest radio and television broadcast in which he announced a change in the date for nominations.

CADRES said that while maintaining that the election was “too close to call”, the ruling party appeared to have “a momentary advantage” while the UWP seemed to have momentum, both of which could factor into the remaining days of the campaign.

Although Anthony held a three percent lead over UWP leader Allen Chastanet when St Lucians were asked about choice of leader, the figures contrasted sharply with the results of a CADRES survey last October when Anthony was preferred over Chastanet by 31 percent to 19 percent.

Said CADRES: “The comparative analysis of these two data sets demonstrate that Chastanet’s popularity increased by about 50 percent in the 8-month period between these surveys, while Anthony’s has remained constant”

It said these data were further disaggregated to reveal the preferences of “Uncertain Voters” and this analysis reveals the fact that Anthony has lost more than half of his support among these voters while Chastanet has doubled his support among uncommitted voters.

CADRES concluded that the size of the “Uncertain Voters”—30 percent—was large enough to impact the outcome of the election. But the company said that based on its “swing analysis”—which estimates the likely outcome in terms of party support based on historic support, the SLP would command 51 percent of the votes and the UWP 49 percent which would equate to a swing of 1.7 percent for the UWP and -0.4 percent away from the SLP.

Respondents were asked to indicate the issue of greatest concern to them at this time and the majority were concerned about employment (40 percent), while the economy was the second most popular concern (20 percent) and health care was the third (12 percent). It is important to note the disaggregated data for this question which isolates the respondents who refused to state their voting intention and have been categorised as “Uncertain Voters”. These persons are likely to determine the outcome of the election and it can be seen that their concerns are in line with those of all St Lucians.

Among the “Uncertain Voters” the single largest concern was unemployment (53 percent), the CADRES poll said.

Meanwhile, political activity is continuing. The UWP has scheduled an economic forum for today to present its main policies, programmes and vision to take Saint Lucia forward. The forum will take place at the Golden Palm Conference Centre, Rodney Bay, from 11:00 a.m. – 1:00 p.m.

Then this evening the party will launch its election manifesto during a National Public Meeting in Gros Islet, at the corner of Marina and Dauphin Street.

The SLP held a press conference yesterday during which it revealed a number of other initiatives it plans to undertake in a new term, under the Fifteen Pledges it announced some days ago. These include a dam to serve the southern region.