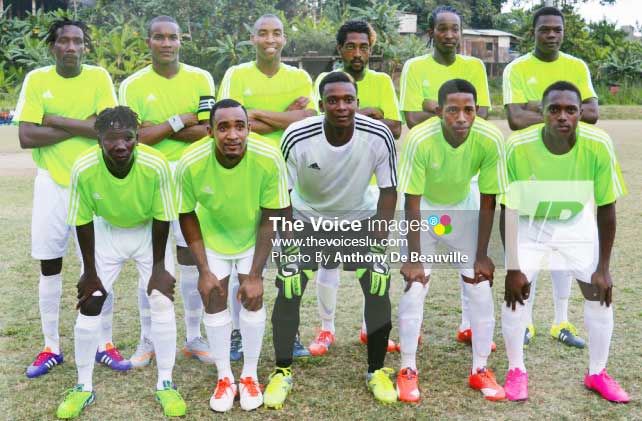 On Saturday evening the La Ressource Playing Field was the place to be as a crowd estimated to be close to 4000 football fans converged on that facility to take in the showpiece in the this year’s Vizions Entertainment 2nd annual Super League Tournament. But the night really belonged to Canaries and Babonneau teams who assured themselves and their supporters tickets to the quarter final stage scheduled for May 14 with wins over Marchand and Mabouya Valley respectively.

In the first encounter Canaries knocked out their opponents Marchand 3 – 0. Marchand needed a win or a draw to salvage some pride in the tournament. No. 14 David Henry opened the scoring for Canaries in the 7th minute to ensure his team stayed on top of things, but Marchand made a few scoring surges. The Canaries defence kept their strikers at bay up until Referee Gordon Wilson’s final whistle for the halftime break.

Going into the second half Marchand showed some urgency as they searched for the equalizer, but Canaries No. 8 Stephen Longville scored a beauty in the 49th minute from a wonderfully taken free kick just outside the box to head the ball past the Marchand custodian Andre Antoine who had no chance of saving it.

It was all to play for as the boys from East Castries kept fighting, Canaries kept them at bay despite several goal raids,and made it 3 – 0 when No. 13 Jermain Joseph struck in extra time.

In Game No. 2, Babonneau also booked their place into the next stage with a hard fought 3 – 2 win over home team Mabouya Valley. The Valley led 2 – 1 up until the 32nd minute of the encounter.

Babonneau’s No.10 Lynch Isidore put his team ahead in the 4th minute when he shot one past the MV custodian to start a celebration in the stands, but all the shouting and loud noise from the Babonneau fans was short lived as Mabouya Valley leading goal scorer in the tournament No. 10 Vernon Abbott equalized in the 6th minute.

With their crowd support behind them the Valley took the lead when No.9 Yveslin Eugene scored in the 32nd minute to make it 2 – 1 to at half time.

With only standing room available in the stands, on the resumption both teams upped the tempo, but Babonneau looked more dangerous and their accurate passing combined with speed on and off the ball proved a little too much for the Mabouya Valley team.

Babonneau went on to equalize in the 70th minute through No. 5 Shan Constable. At that point the MV crowd went silent as from here on a 2 – 2 draw for Babonneau would see them through, but one more goal for MV would knock Babonneau out from the tournament.Both teams knew exactly what they had to do.

With just 20 minutes left, MV started to rebuild their momentum once more and also their confidence on the square, but Babonneau was equal to the task as their defence refused to budge. Babonneau custodian No.00 Alex Joseph pulled off a remarkable save and in the dying minutes from a full blooded low driven right foot shot from inside the box, but at the end of it all Babonneau No.7 DonicionInglis had the last say as he was still able to slip one though the MV goal in the 90th minute to settle the deal 3 – 2.

Meanwhile, on Sunday, it was disappointing news for the football fans in Desruisseaux, when Roseau Valley faited to turn up for thier match agasint Laborie.

In the second encounter home team Desruisseaux played to a 1 – 1 draw with neighbours Micoud.

Following Sunday’s match the tournament takes a break for the Jazz Festival and will resume on Tuesday with a very important encounter at the Gros Islet Playing Field. From 6.00 p.m. Central Castries play La Clery – both teams currently on 6 points from two matches and will want nothing less than a win to top Group 3. While at 8.00 p.m. South Castries play Choiseul. Either of these two teams will be looking for their first points in the tournament. So it’s anyone’s guess who will win that encounter.