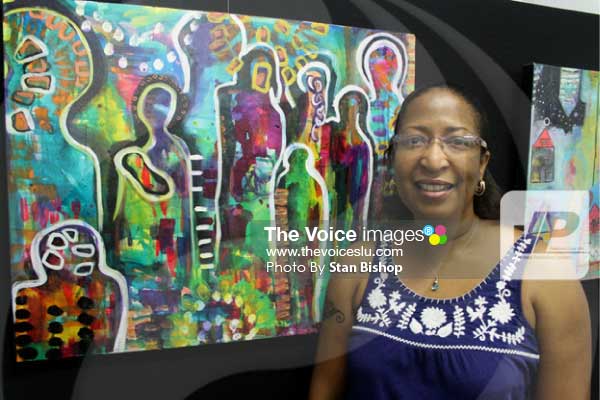 ‘There’s Much Room For Self-discovery’.

TO listen to Nicole Edgecombe describe the emotions and creativity that go into her works of art is as analogous as Sir Derek Walcott explaining the miles of history that lie behind a hibiscus floating across oceans. The conversation grows more intensely by the minute and one is left to conclude that painting is probably Edgecombe’s favourite meal of the day.

Edgecombe, a clinical psychologist by profession, said her first obsession with art began when she got her start in painting from Arnold Toulon, receiving about half a dozen lessons from him in the mid-1990s.

After getting married soon after, she divorced her paintbrushes, paints and palettes for quite a while before taking up painting again some years ago when a friend suggested that they attend a few art classes run by Ken Lawrence, a prominent Saint Lucian artist and longstanding proponent for a more progressive and established art community.

Despite Lawrence’s classes playing a pivotal role in her artistic advancement, Edgecombe’s spontaneity soon found itself conflicting with her teacher’s play-it-by-the-book regimen. But the trade-off seems to have paid off when after learning the rules, she decided to break a few of them.

“I fell in love with charcoal and oil paints,” Edgecombe said, with a slur on the word ‘love’. “Ken teaches in the old masters’ style and he was very serious about it. I enjoyed the classes and did some painting on my own at home. But I felt a bit restricted because I’m a very spontaneous person, so I wanted to paint big, fast, large and free about what comes from inside of me rather than from anything I saw.”

During a bout of sickness that lasted about six months she could not paint, she signed up for an online course that taught intuitive painting. Since her line of work as a clinical psychologist involves some measure of gut feeling and understanding people, the new art form was both intriguing and life-changing.

“Intuitive painting is the process of painting in multiple layers, starting with random marks, no plan and allowing a conversation to take place as to what the painting wants. Literally, as you put more marks onto the canvas, the painting begins to suggest itself. So under every painting there are probably six paintings,” Edgecombe, who says she paints with her fingers instead of a paintbrush 90% of the time, explained.

Edgecombe, who also specializes in acrylics and mixed media, is among the few artists whose works were featured at La Place Carenage this week as part of the 19th annual Teatime Jazz hosted by the Saint Lucia Air and Sea Ports Authority (SLASPA). Also on display were the works of her former art teacher, Lawrence. Her works were also featured this week at the Arts Village at Massav Park. Prior to that, she participated in an exhibition held at the National Archives.

With insightful and colourful pieces like “Strange Fruit”, “Piton Dream”, “Village Life” and “Dauphin Spirit” to her credit, Edgecombe says music serves as a useful stimulant during her creative process that often finds her working on up to six paintings simultaneously. Sometimes an original idea for a painting gets painted over, depending on the artist’s mood or what the situation demands.

The seriousness with which Edgecombe approaches her art is also reflected in her knack for keeping an open mind. For example, while painting “Dauphin Spirit” on the beach, the strong winds blew grains of sand onto her canvas. The consummate artist chalked that up to kismet and, sticking to her strong knack for originality, those grains of sand now form part of the painting she describes as her favourite.

Inasmuch as Edgecombe paints with the intention of selling her pieces, she admits that her strong and unique connection to each painting often militates against her parting ways with them even after a receipt is written. She believes this is one of the many aspects few people understand about artists and their labours of love.

The old adage “art imitates life” also found its way into Edgecombe’s work towards the end of last year when she lost partial vision in one of her eyes momentarily. Painting took on a deeper meaning for her as various themes about that experience began to materialize in some of her pieces, especially in “Collective Unconscious”, which features various faces with eyes closed but one with a missing eye.
“While that painting connected to me about my experience at the time, it also did so about the experiences I have in my work,” the artist said. “It’s also about the unconscious connection we all share, that human experience and connectedness to suffering from which we cannot escape.”

Edgecombe is currently part of a major push by a collective of artists – including her mentor, Lawrence — to establish a new art gallery at the invitation of SLASPA. The movement, dubbed Artist Circle, aims to foster closer links within the art community by promoting art education and workshops and hosting exhibitions. She said any artist interested in joining the movement can do so by registering.

Despite taking up art as a hobby initially, Edgecombe remains grateful to those who have taught her and those who offer honest critique of her work. With just three public exhibitions of her art work thus far, she seems determined to continue painting her passions onto canvasses if only for the therapeutic relief it brings her. She also wants people to know that the love affair she has with painting can also be one with which anyone can become engaged.

“From the position of a psychologist, I can tell you that painting and other creative activities increases one’s health – mentally, physically and emotionally,” Edgecombe said. “There’s so much room for self-discovery.”