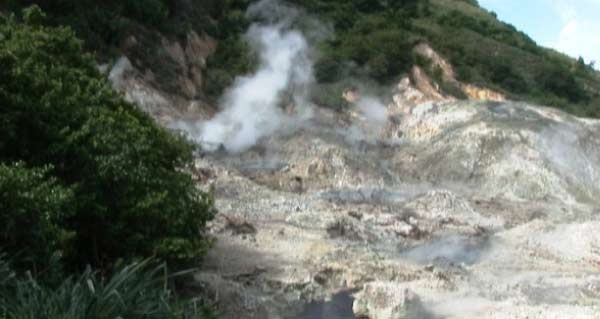 AS we continue with the idea of parallel worlds, we note that quite apart from the bizarre consequences resulting from some of these models of the physical world, we also need to be concerned with what happens when these parallel worlds interact.

In an address to the St. Lucia–British Caribbean Chamber of Commerce at a local function in February this year, our Prime Minister indicated that months after he had written to the British Prime Minister seeking assistance after the passage of the trough in December 2013, Britain had allocated a grant of £300 Million to the Caribbean, and St. Lucia would be the beneficiary of £30 Million.

Given the proximity of the Prime Minister’s indication of his request for assistance after the trough and his advisement of the British government’s grant, one could be excused for concluding that at least part of the allocation from Britain would be in respect of climate change projects, and this was therefore welcome news.

Welcome, as St. Lucia is reported as having indicated, in November of last year, that it did not have the financial capability to undertake the projects necessary to achieve the carbon reduction goals that it had set itself.

Welcome, also, as in January of this year there was news of a collaborative approach between Government and LUCELEC regarding that company’s trial approach with a 3.2 MW solar plant, and this would have been one project deserving of financial support.

There is however, no public information available on this £30 Million funding from the UK, the only grant on record being that of £300 Million to the region announced by the British Prime Minister on his visit to Jamaica in September 2015, a grant to be administered by the CDB.

There is also no public indication of an allocation of grant funding to St. Lucia for climate change projects, and this is important, particularly with respect to LUCELEC.

Throughout the developed world, as the transition from fossil fuels to renewable energy has taken hold, this transition has been encouraged by government subsidies or by surcharges to the consumers of those countries. How can it be expected that in a micro-state such as ours, a utility company could undertake a trial project involving a tiny solar power plant at its own expense?

The same question arises with respect to the establishment of the trial wind generator. Is the consumer to be expected to pay for these experiments, or are LUCELEC’s shareholders to pay?

LUCELEC is reported as having had the assistance of a number of organisations in the drawing up of its requirements for the solar plant and in the preparation of its request for proposals for its supply, but nowhere is any indication given of funding to the Government or to LUCELEC for the cost of this trial plant.

While the size of the pilot solar plant needs to be determined by LUCELEC for technical reasons, the national interest has to be in the replacement of the use of fossil fuels and, in doing so, the saving of foreign exchange on the importation of fuel. There is no indication of the plan by which this is to be achieved, but St. Lucia’s National Energy Policy provides some indication of the process by which the requirements for St. Lucia to transition to renewable energy were established.

It sets targets for the contribution of renewable energy to our electricity supply starting with 5% of electricity generated in 2013, rising to 15% in 2015, and reaching 30% by 2020. It also anticipates the introduction of competition to LUCELEC, as any shortfalls in the meeting of those targets is to be made up by Independent Power Producers.

While these target quotas may be desirable, the document provides no indication of how LUCELEC is to finance this transition, nor does it indicate who will bear the cost in the event that generation from renewables results in electricity which is more expensive than it is today.

What we do know however, is that by June 2011, the Eastern Caribbean Regulatory Authority (ECERA) project had been established by the World Bank, but with only two participating countries, St. Lucia and Grenada. St. Lucia has also recently established its National Utility Regulatory Commission, and on doing so, it also managed to discard the only regulatory experience that had been developed in this country.

We might also note that, as reported in that earlier article on privatization, World Bank staff had as far back as 2005 envisioned that the regulatory environment being created for the water sector in St. Lucia could become a model for the region, and could be expanded to include regulation of electricity as well. This plan has now been achieved in St. Lucia.

We have however been down this road before, and have seen that with the privatization proposals for WASCO, regulatory legislation was also first passed even though the proposed private sector participation did not materialize.

While we should all support the ultimate adoption of renewable energy, no basis is however being provided which would lead to this support. Even with the recent announcements on our drive to develop geothermal energy, there is yet to be any indication of how the country is going to benefit.

On the contrary, we note that the Permanent Secretary, Ministry of Energy, recently made mention of a cautionary word from a representative of the Caribbean Development Bank that geothermal energy may be too expensive to develop. While this caution was summarily dismissed by the Permanent Secretary, it would be interesting to know both sides of that argument. Unfortunately, the feasibility studies are not available to the public.

In the build-up to COP 21, St. Lucia somehow managed to become CARICOM’s lead voice on climate change, even as our own contribution to the effect remains tiny. That voice however, remains silent on the anticipated cost of power generated from renewables, and on the availability of grant funding which would subsidize that transition in these islands.

If these concerns seem far-fetched, here is what the CEO of Barbados’ regulatory agency, the Fair Trade Commission, recently had to say on the matter of renewable energy (RE):

“While our legislation generally requires that a least cost approach be used to set rates, the Commission may be called upon to take other factors into consideration, such as the promotion of the growth of the RE sector, the costs incurred by the RE producers and their expectations for a reasonable return on investment” (Nationnews, April 14, 2016).

Somebody evidently is going to have to pay, but it shouldn’t be the consumer. After all, these islands have contributed nothing to global warming, and shouldn’t have to meet the cost of containing it.

This, then, is the type of challenge we face as we interact with the developed world. We are encouraged to commit to establishing new regulatory regimes that open our power generation markets to independent power producers and do so, told that this is the path to cheaper electricity.

No one bothers to explain how this reduction in electricity cost is to be achieved, while there is now tacit recognition in Barbados that this may not yet be possible. We have previously drawn attention to Jamaica’s difficulties with the adoption of wind energy.

It would seem then that success in this transition to renewables really depends on which side of the fence you sit: Government’s promotion and regulation of it, or LUCELEC’s having to do it.

Or in which of the two parallel worlds you reside.