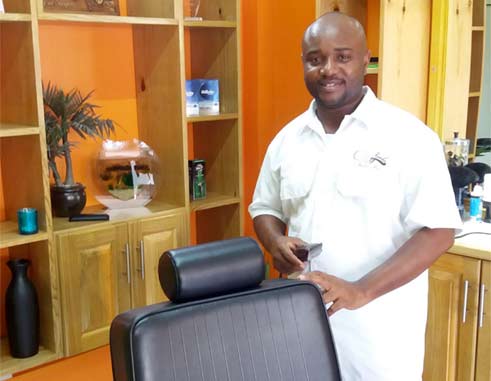 BANNAH Suffren has for the past five years shown that it doesn’t take much to give back to those less fortunate than yourself.

Today’s FITC is a 34 year old barber with a heart of gold, the owner of Cutty Ranks Barbershop at 34 Mary Ann Street.

The husband and father of three has been a professional barber for 11 years and is what you will call a genuinely nice guy.

Suffren who was born and raised in Leslie Land, Castries says he loves socialising and interacting with individuals.

The barber said he never knew that this would be his path in life but is glad that he took it.

Being the founder of a community outreach programme which offers free haircuts to underprivileged boys around the island, Suffren says thanks to the help of an uncle from the U.S,, he was able to start up his business and in turn was able to give back.

Suffren and his wife pay visits to different schools every single week day and says he loves every minute of what he does.

Today he tells The VOICE about the challenges that he has faced and why he will not let these challenges slow him down.

The VOICE: How did you get into barbering and what about it has you hooked for all these years?

Bannah: I used to take an interest in other people’s haircuts and invariably I would always find that something was missing and wanted to add something to it. I’d tell them that they should do this or that, they should have done it this way but I also always wanted the opportunity to try it out on those who would give me the chance to do it…you know, friends and persons of my age group. You know when you’re young, you always get guys coming with razor blades asking you to mark them up. But amazingly, when I used to do it, I realised that I never cut anyone and I would always get told that the work was good, even though I wasn’t seeing it for myself. I started getting more interested in barbering especially as I went into cutting hair with scissors and combs. I would spend a long time on one head but at the end of the day, it used to come out good and I was surprised. So I believed that I was pretty much blessed with this particular skill. To be honest, it has been a very exciting skill and I‘ve gotten better and better at it. When I started in the area that I’m from, I was just doing it as a hobby. I wasn’t actually charging people. Then suddenly, it so happened that when school was opening, persons who knew what I was doing and knew how good I was would send their children to me. Imagine, I was doing all of it with a razor blade, a comb and a pair of scissors, there was no machine because I couldn’t afford one. That’s when I said, if they’re liking it, I will continue doing it. It wasn’t something that was bringing in much money at the beginning so I started working. I’m not that kind of person who will sit around and wait, I always need to be out looking for jobs no matter what they are. I used to pump gasolene, I used to wash cars, I used to do house cleaning for people, wash their homes, cut grass…I used to do all of these things before I reached where I am today. There was even a time when I would buy perfumes from stores to resell them probably for $5 more. I did anything that would allow me to not get myself involved in any illegal activity

The VOICE: Now you and your wife started up a Community Outreach programme, please tell me about it

Bannah: To be honest, when I got into the Christian lifestyle about five years ago, I started feeling differently and I wanted to be involved and set a positive image of myself out into society. I used to be in the shop when it was quiet and I would wish that people would come in because I wanted to cut hair. I was frustrated especially when I had to stand around waiting for buses to go home with my family, because I leave the shop really late. But you know strangely, that idea just popped into my head that I should start going into the communities to help the children who cannot afford haircuts. That would occupy the time I had doing nothing. The voice was saying you need to occupy yourself because the way you feel when you have nothing doing, the kinds of things that run through your mind, it will lead you to something. This kept on pounding in my head over and over again but I never gave it much attention and carried on. But then I saw signs telling me to take on that task because children during the rush when school was reopening, would come in groups but half would get their hair cuts and the rest would just be accompanying them. I’d ask them why they’were not cutting and they would say it was because this one’s mother could not afford it or that that one’s father had not given him the money yet etc. I said you know what? I’m gonna cut their hair. I need parents’ permission but still went ahead. I took joy in it. I was inspired by this Gaspard [Henry] guy who has Feed The Poor Ministries One day, I said this was bothering me so it seemed that I would have no choice but to do it as I was convinced that this was my calling. I told my wife, I’m going to the Marchand School as well as other schools in my area and tell them that I have this proposal where I will provide free haircuts to underprivileged children. The first school which welcomed me was the Marchand School and on the first day, my wife and I alone cut the hair of around 50 boys from that school. I never knew that was so needed in the different schools.

The VOICE: How far has the programme reached since you started?

Bannah: It has spread to a number of schools around the island because I reached out to different schools and offered the service to them. I figured that it should not be given to just one district so what I did was I went to the Ministry of Education and had a meeting with the Chief Education Officer and indicated what I had been doing and what I intended to do for the future of this initiative. He said he would fully endorse it as he believed that anything pertaining to uplifting and motivating children, he would fully endorse it. He asked me how I would manage but I said where there’s a will, there’s a way. The pastor of the Streams of Power told me that I was putting too much focus on the programme and not concentrating on my business because I was constantly coming to work late and I was always running here and there to other schools. That’s when he asked me what was I getting from it? I said blessings but he said to me I should at least ask for a small contribution and that I should prepare a proposal and they (the church) would be the sponsor for the initiative. That’s how the whole idea of reaching out to sponsors came to me because I never had any idea of how to approach people to ask for any help. I never thought that people would look at something like this and want to sponsor it. In 2014 we won an award from the Chamber of Commerce for Idea of the Year. This programme has been a great benefit for the schools and now the boys are filled with excitement when they see the barber coming to the school. South Shoe Store has come on board and now donates brand new shoes to give to the same underprivileged children and CFL provides us with shampoos, deodorants and tissue paper so we dish that out to the students. When I receive financial support from companies, I buy necessities for the students. It wasn’t something that they were telling me to do, I just wanted to make it a full package for the students. After all, we are dealing with children who are in need.

The VOICE: What challenges have you faced since the start of the programme?

Bannah: I actually appreciate the challenges because now I really understand humans. Some of us just don’t understand the depths that some people go to, to make other people happy especially when you know you are positive. Not everyone is on the same level. Some people are trying to use these opportunities to make differences in their lives as well as to make an impact and send a positive message to society. There are people who criticise us and you will always find that. And my wife, I just want to big her up and send her some love because she supports me everyday that I go to these schools, and she cuts hair too. Sometimes when cutting 30, 40 to 50 heads in a day, no body is there to witness what we go through. It’s not easy to deal with children, teachers and parents know that…it’s not easy and we have to deal with that. There are children who don’t want to sit still, some want to misbehave, some want to play around and we have to spend extra time dealing with them. Then you come back and your clients are complaining that you are never there but at the end of the day, we just want to send a positive message out there. It’s not always about the money. I had very well known persons who started supporting us financially and then all of a sudden, it’s like they don’t trust me anymore and I don’t know what kind of talk is going on but I’m seeing that we put every effort toward every sponsorship that we receive. Do you know how many times I have to service my vehicle after travelling all over the island? Do you know how much I spend on blades because I need new ones for each child? Look at the products that we need for the service for each child, there are numerous things. Do you know the risks we are taking driving in all holes in Vieux Fort, Choiseul…Nobody knows. I’m not a rich man, I need the help. So if I’m asking for support and you all are not sure of what I’m doing with the money, please come along with me…I’m always inviting people to come over to see for themselves and I have reports for everything. I love what I do and it gives me the drive to continue.