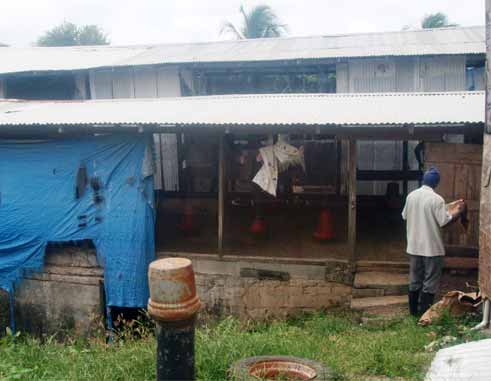 Operations To Be Relocated.

THE government has started moving against chicken farms in the Augier region which are said to be causing a nuisance to children at a nearby school resulting in illness and disruption of their classes.

Last Saturday morning, a team from the Ministry of Agriculture and Invest St. Lucia converged on the farms under the watchful eyes of personnel from the Special Service Unit (SSU) of the Police Force. One farm, which has been a source of great concern to the school for years was promptly shut down to be relocated elsewhere.

Five chicken farms and a pig farm are located approximately 100 metres from the Augier Combined School on lands which belong to Invest St. Lucia.

Permanent Secretary in the Ministry of Agriculture, Darius Gabriel, told The Voice in an interview that the owner of the farm was issued a notice by the Public Health Board, to cease operations.

“The State had to take measures to resolve the matter, so we are here to get the process going. We are relocating 4,300 birds….It is now a State facility. The State is taking possession of the birds,” Gabriel explained.

He however declined to say where the birds will be relocated to.

Gabriel said the relocation of the farms is a process which will continue until all the birds are relocated.

“We will be dealing with each individual farm in accordance with resources availability and their unique conditions until the nuisance is abated, once and for all. Each farm situation is unique and presents a set of unique challenges,” he said.

According to the permanent secretary, his department has carried out such operations, mindful of the livelihood of the farmers, public health concerns with respect to the school and the concerns of the State itself.

He said he was pleased with the level of cooperation his department received from the farmers so far.

“So far the operations have gone smoothly,” Gabriel said.

Nigel Williams, owner of the farm which was closed said he was on his way to Vieux Fort town when he got a call from Gabriel that he was on his farm to conduct the exercise.

According to William on March 30 he received a notice from the Ministry of Health to cease operation of the farm immediately, if not the matter will be taken to the second district court.

He lamented that the situation will seriously affect his livelihood. “We are back to square one,” he grieved.

The school was forced to close a few weeks before the Easter vacation after it became infested with flies, coupled with a stench from the nearby chicken farms that have been a source of great annoyance to teachers and students for several years.

As a result, the pupils were relocated to two locations in the community, the Augier Evangelical Church and the Parish Centre. The school, where a number of students are asthmatic reopened yesterday, after receiving a thorough cleansing.

Parents of children attending the school have been incensed over the long standing complaints about the effects of the chicken farms on the school and the seeming lack of response from the authorities to the concerns.

Last week, the president of the School’s PTA even took the Ministry of Health to task over the delayed reopening of the school, saying it had had ample time to attend to the complaints.