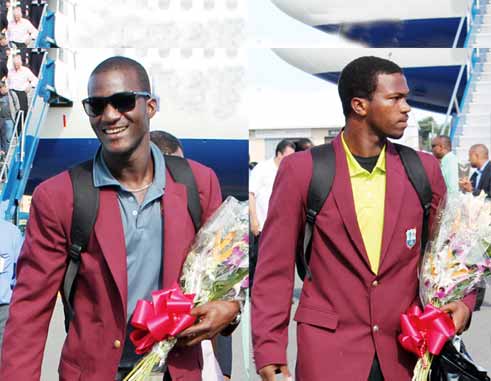 DARREN Sammy and Johnson Charles will receive a welcoming home fitting for heroes when they arrive here later today after their World T20 cricket campaign in India.

The West Indies men’s team captained by Sammy lifted the championship for the second time when a last over blast by all rounder Carlos Brathwaite sank England in the finals on Sunday to give the Caribbean team the title.

Brathwaite in his first major outing for the West Indies hosted Ben Stokes for four consecutive sixes as West Indies made light work of the 19 runs they were set to win off the last six balls.

Although Sammy hardly performed with bat or ball during the series, it was clear that his inspirational leadership of the team had contributed greatly to its eventual success.

Charles, on the other hand, scored a polished half century in the semi final match against India that stunned the home crowd at Eden Gardens last week.

Yesterday, the Ministry of Youth Development and Sports issued the media with invitations to a “Homecoming” celebration for the two Saint Lucians when they arrive at Henwanorra International Airport this afternoon.

From the airport, a motorcade will take Sammy to his home in Dugard, Micoud and Charles to his home in Millet. But the motorcade will continue to Castries where the cricketers will call on Governor General Dame PearletteLouisy at Government House and end at Derek Walcott Square for a mass rally.

Prime Minister Dr. Kenny Anthony extended his congratulations to the regional teams, and especially to Daren Sammy, the captain of the men’s team.

Said Dr. Anthony: “What a spectacular pair of victories. The West Indies team fought to the end and snatched victory just when it mattered. This is another example that leadership and team spirit are critical ingredients for success.

“One thing I know about the West Indian spirit is that it can be resurrected against the odds. We were very good with the ball and just as extraordinary with the bat.

“Thanks to the leadership of Darren Sammy, today is a beautiful day in the Caribbean, with many records to celebrate.”

The Political Leader of the opposition United Workers Party Allen Chastanet and the members of the UWP also congratulated the West Indies teams. Chastanet said: “We are extremely proud of the achievement of the under nineteen, women’s and men’s teams for their emphatic respective wins in the 2016 ICC World T20 Championships.

“Saint Lucia and the region are celebrating their historic victories. The women and men both displayed team spirit and determination throughout the entire tournament ending in thrilling overall wins.

“The community of Dugard, and the entire constituency of Micoud South are especially proud of this victory and wish Captain Darren Sammy their heartfelt congratulations.

“We also offer tremendous praise to the team management and all the persons who worked with the teams in preparation for this tournament. We look forward to our players returning home to celebrate”.

The Leader of the Opposition, Dr. Gale Rigobert, also congratulated the West Indies men and women’s cricket teams on their “remarkable display of poise, professionalism and the fighting spirit that characterize the people of the Caribbean”.

Dr. Rigobert said: “As Ambassadors of the Caribbean, you continue to represent us with distinction and fly our flag high. We rally ’round the West Indies in bad times: we share tears together, we analyze the problems in our system and recommend improvements in our own unique way. But, we also celebrate the accomplishments of our team together”.

Rigobert continued, “Our victories at Eden Gardens in India are indicative of the heights that Caribbean people can continue to reach when we pull together. I want to congratulate Staphanie Taylor and the women’s team on a fantastic tournament, defeating the mighty Aussies, the three-time champions – in a convincing fashion. But, of course I have great and special adulation for our men’s captain and son of the soil, Darren Sammy, who continues to lead the West Indies team with energy, with purpose, and with a faith that has produced two World T20 Championships under his captaincy. Darren Sammy continues to display the will and strength of the Caribbean people but in particular, of the Saint Lucian people. He showed off the best of the Caribbean in the face of great adversity”.

The historic victory of the West Indies Under 19 Team, winning the Under 19 Cricket World Cup for the first time, set the tone for the other two victories that followed. According to Dr. Rigobert, “our youth displayed unmatched sportsmanship, tenacity and skill. Indeed, our Under 19 Team has given us reason to believe that our region will continue to prove its distinction in cricket for some time to come”.

She congratulated all the players, coaches, support staff and administrators of the West Indies Cricket Teams and hoped “we can use these remarkable victories as a turning point in West Indies cricket so we can move on into a brighter future.”