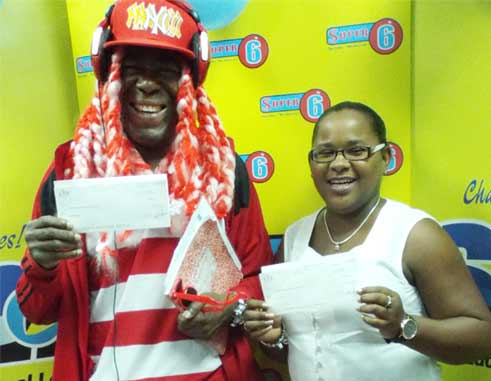 THE staff at the St. Lucia National Lottery had yet another exciting day of big giveaways on Wednesday changing the lives of two Super 6 winners at the SNL Headquarters in Sunny Acres.

St. Lucia is boasting the first two Super 6 winners for the year so far leaving players from the other playing islands (Dominica, Grenada, St. Vincent) feeling green with envy.

Vincent Edgar I and Hannah Charlery were present to receive their big payouts with $240,000 being awarded to Charlery and $200,000 to Edgar.

A frequent lottery player, Edgar is not a first-time big winner and has previously pocketed over $30,000 in the Big 4 game.

The eccentric Edgar who was decked in his brand colours of red and white from head to foot (including accessories like phone case, watch and notebook) said he has been playing the lottery from the time it began.

He said: “The more you play, the more chances you have. It can be as little as $2 but make sure that on the day in question, you have a ticket.”

The big winner admitted that the third time was the charm before hitting the jackpot as he had spent a lot to get his prize: “The day that I won the Super 6, for three consecutive weeks, I’d been playing $99. You could have only played one ticket but like I said, the more tickets you have, the more chances. I played $99 – 33 tickets at $3 each and I only won one free ticket and I lost on all 33. I played for a second time and repeated the numbers, the same thing happened, another free ticket and no winning numbers.

“Most people would have just thrown their tickets away but I did not. I replayed it for the third time. When I checked, the first 30 tickets showed nothing, not even a free ticket this time but fortunately, the line before the last was the jackpot and here I am today.”

A not so loud Charlery said it was an exciting and overwhelming moment when she found out that she had won.

She said: “For a moment, I thought that the numbers were wrong but they were correct. I checked once, twice three times.”

She said whilst she has been playing for roughly 15 years, she has never won any prize apart from free tickets. This was her first monetary prize ever.

Regional Marketing Manager of SNL, Mary Edward said as a way of treating customers, they had prepared an enticing promotion to this evening’s Super 6 draw: “We have a very special offer for you this Easter. Anyone who wins Super 6 this coming Saturday….. Friday is a holiday… anyone who wins that jackpot will get an extra $100,000 on top of their winnings.”