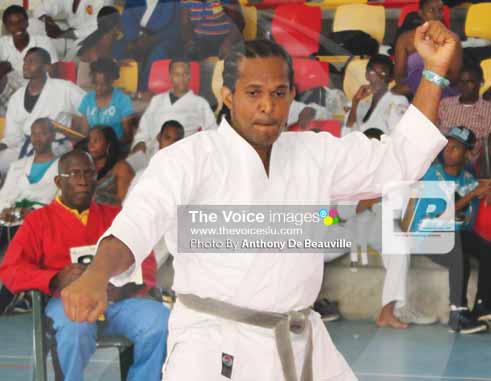 THE Beausejour Indoor Facility will be a hive of Martial Arts activity tomorrow when the Association of Professional Martial Artists stages its 11th Martial Arts Tournament dubbed “The St. Lucia Pitons Open”. The championship will start from 10:30 a.m.

Master Benny Chitolie, the Chairman of APMA has praised the association for its longevity and contribution towards youth development and sports tourism on the island. He said, “This year is no exception as we already have a 48 member team from the USA on island and a 40 member team from Trinidad and Tobago to do battle”.

He continued, “We are expecting many more teams from around the Caribbean region and we are also excited about our local clubs participating this year such as – The Millet Karate School, Hattsuryu Temple, Clifton Sealy’s College of Martial Arts, Chitolie’s Martial Arts Institute, Soufriere Karate League and Advanced Martial Arts School. During the championship I also expect the various teams to portray a very high standard as we have very experienced and world champions in attendance”.

The participants will do battle in the various categories – Kata, Kumite, Weapon Forms, Team Events and the Black Belt Championship titles.

Chitolie said this year, the Martinique contingent were unable to attend due to other engagements, but said that the event has tremendous benefits to the island as the foreign teams set out to explore the entire island via booked tours.

APMA has been able to contribute immensely towards the development of sports tourism on the island for the past eleven years as every year they sell in excess of 30 hotel rooms especially in the Rodney Bay area through the St. Lucia Pitons Open.
APMA is proud to have Master Jose Torres, Director of Tang Soo Do International and Executive Director of the North American Federation of Martial Arts in attendance. Master Torres, in collaboration with APMA, will be hosting the 2017 World Martial Arts Championship right here in St. Lucia, during which time there will begin the filming of a martial arts movie featuring talent from St.Lucian martial artists.