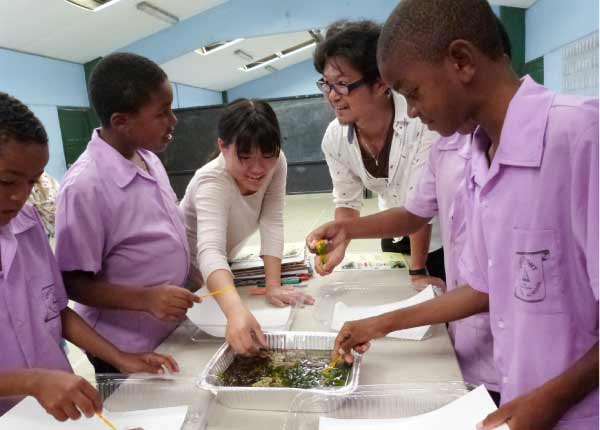 LAST month, ten assorted Master’s and Bachelor’s degree students from Japan came to Saint Lucia to conduct three-week studies on aspects of small-scale commercial and environmental fisheries in the southern part of the island.

The students came as short-term JOCV volunteer (Japan Overseas Cooperation Volunteers) members of kick-off collaboration among the Saint Lucia Department of Fisheries, the Saint Lucia National Trust (South) and the Fisheries Departments of universities in Japan and the Japan International Cooperation Agency (JICA)

The group was sorted for each aspect of the study: fisheries, environmental education, seaweed and handicrafts using ocean materials. After three weeks, they would report their findings to the Department of Fisheries of Saint Lucia. All students were dispatched to the Pointe Sables Environment Protection Area in Vieux Fort.

The Environmental Education volunteers studied the environment with a focus on pollution and conducted a three-day workshop for Vieux Fort Primary School students. The primary schoolers were lectured on fish and the environment, especially on the subject of rubbish, the eco-system and marine life. Later they were taught one way of re-using waste plastic by making bangles. The children were also taught fish-printing: the process of making prints on materials with fish and paint by the JOCV volunteers.

The seaweed study group gave their accomplishment report on the status of seaweed in the Pointe Sable Environment Protection Area after collecting data on seaweed around Scorpion Island and its nearby reef for three weeks. They found 35 species of seaweed thriving there of which only ten could be identified. The group explained that their study had been limited to shallow water areas and further study would have to be conducted on deeper areas to make the report complete.

This group also observed seamoss farming and exposed themselves to the seamoss foodstuffs in order to find ways of introducing the plant as a staple in the Saint Lucian diet. They produced a booklet of seamoss recipes that may find its way to the supermarkets on the island.

The fisheries group confined themselves to studying the make-up of small-scale fisheries in Vieux Fort, even going out with the fishermen to fishing spots and participating in different methods of catching fish. The final result of this branch of study will be video material and posters of the value chain in fisheries. The group also produced a handbook on fishing methods in Saint Lucia.

Handicraft was concerned with ocean materials and how they could be incorporated in small scale artisanal operations. This group studied the selling appeal of items such as shells, driftwood and fish products in craft items made for tourists. It also investigated using more durable fish skin as to make belts and purse materials after processing.

Over the past 20 years, the Japanese Government, through JICA, has contributed to the area of fisheries in the Caribbean region by assisting development of infrastructure and in capacity building of persons related to the fisheries in St. Lucia, to improve the efficiency and distribution abilities of the fish industry.

This incipient project aims to help the fisheries industry with small scale projects that still need to be done to comprehensively develop the industry. The fisheries industry is enjoyed by Saint Lucia as a source of protein and income for its people and for some of the external sectors that depend on it. And because of this, most tend to think of the industry as the basic act of going to the sea or to a river, casting a net and fishing.

Actually, the fisheries industry is more complex than this can involve more than just fishers. There is the environmental aspect, which allows us to maintain the ecosystem that keeps the industry (and humans) thriving, the small entrepreneurs and tourism aspects in which the study of handicrafts can assist, and the seaweed aspect as well.

This programme will continue for the next two years, with cadres of volunteers coming twice a year to continue the studies.