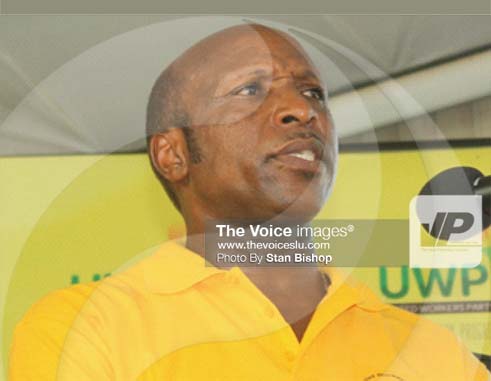 WHEN will it end? The buffoonery of the United Workers Party, that is.

Following a fruitful day at the office on Wednesday, I hurried home to take in the HTS Evening News. Turns out, I need not have bothered. For there was UWP chairman, Guy Mayers, responding to protests mounted by his party’s supporters in Dennery North over the possible candidacy of Andy Daniel – yes, the same one who was soundly defeated by Labour’s freshman candidate, Shawn Edwards. Rather than address the concerns of his supporters, Mayers instead descended into an attack on Prime Minister Kenny D. Anthony. Does Mayers even think anymore? Has he not realized or come to terms with Shawn Edwards’ phenomenal work in the constituency in particular and within his Youth and Sports Ministry in general over the past four years? Does he think attacking Kenny D. Anthony would assist in finding a suitable UWP candidate?

According to Mayers, whilst he was not condoning the behaviour of the UWP mob – so much for freedom of expression within Chastanet’s UWP – their behaviour nonetheless showed that should the UWP not choose the right candidate, there was a real danger of Labour’s return to office.

Poor Mayers he just doesn’t get it.

Has Mayers forgotten that it was under his watch as National Security Minister that a man was murdered in then Prime Minister Stephen King’s constituency office whilst the Prime Minister was a mere ten feet away? Does Mayers not recall that it was under his watch a brazen daylight escape took place at the Bordelais Correctional Facility? Has it slipped Mayers that he was the Minister who oversaw “Operation Restore Confidence” during which twelve civilians met their demise in what has been described as “extra-judicial killings?” Does Mayers not realize that he, more than any other person in Saint Lucia, is responsible for the American sanctions against our police officers?

Two weeks ago, during a Gros Islet meeting of the UWP, Mayers was at it again. As if insulting the hardworking and indomitable Emma Hippolyte weren’t enough he would further embarrass himself by announcing that within weeks of being returned to office, a UWP government would initiate a tribunal into IMPACS. Who is Mayers attempting to fool? IMPACS did not kill twelve civilians. Instead, IMPACS is an investigative team which enquired into the events surrounding Mayers’ so-called “Operation Restore Confidence.” The resultant report suggested the twelve deaths were extra judicial in nature. The report alleges a systematic effort to unlawfully rid the streets of certain people. That is what IMPACS is. It is not a police operation but instead a report into police operations. So what tribunal is Mayers speaking about? Perhaps, Mayers knows what is contained in the report. Perhaps he may be of the view that the report somehow implicates and indicts him. And perhaps his proposed tribunal may be nothing more than a smokescreen to do away with a report he may believe is not kind to him.

Guy Mayers will soon find out that whilst he can run he cannot hide.

But back to his comments whilst he attempted to extinguish the UWP fire in Dennery North. What is it about this man from Riviere Doree, Choiseul, which causes such angst among the UWP hierarchy? Even Michael Chastanet has joined the fray. The mere mention of the Prime Minister’s name had the businessman seeing red. Literally! Imagine that. In the course of a recent interview and in response to the host’s question, the elder Chastanet stated that in his early life he had “worked” for Kenny Anthony’s father for several years. Kenny tells me that this never happened. If Chastanet loaded or carried copra produced by the estates his father managed, it was to load his boats. Five minutes later, however, and stung by the suggestion that he coveted the position of Governor General in a UWP administration, Chastanet reversed course shouting out loudly that he had never worked for anyone his entire life. Huh? Like father, like son?

As I write, Guy Joseph is on his favourite television station claiming governmental neglect of the roads in his constituency. If I did not know better I would never have believed that this very individual was the Minister responsible for roads in the last administration. Was he too busy then, attempting to force his Prime Minister’s hand into giving A & M the airport contract? Some months ago Prime Minister Anthony sought clarification over whether Mr. Joseph had promised Stephenson King several millions of dollars if A & M received the airport contract and to date that question has received no adequate response.

Lately, the UWP line has been that the Prime Minister has a personal vendetta against the Chastanet family. At the Labour Party’s recent launch of Jerome Gedeon, the Party’s candidate for Dennery South, the Prime Minister repeated something he had said previously. He reminded supporters that the upcoming election would be a battle between the Chastanet’s and the SLP. For that it is said he hates the Chastanets. Really?

Where were these people who now make these outlandish charges when in 1996 Sir John publicly announced that “a Barnard would be Prime Minister of Saint Lucia” over his dead body? Never mind that Anthony was never a child of privilege. Was not Compton suggesting that the rich and privileged class should not also hold economic power? What Kenny Anthony said comes nowhere near as hateful and spiteful as what Sir John said then. Did any of those now shouting the loudest admonish Sir John?

And what about the time when a member of the clergy referred to Anthony as a particular animal? Where were those who now attempt to crucify Anthony for speaking a political truism? Did they denounce the vile utterances by a man of the cloth? Did they say this was beneath the dignity of a priest?

Who could ever forget the imputations by Guy Myers that Kenny Anthony’s wife, Professor Rose Marie B. Antoine was a witch? There was not a whimper! No one condemned Guy Mayers!

The reality that his detractors must accept is that Anthony, more than anyone else, is responsible for the restoration of Saint Lucia’s good name overseas following the disastrous five-year reign of the UWP. Accept it or not, it is Kenny Anthony and his administration which have returned investor confidence to the country. Under the last administration the reverse was true; investors were moving away in droves.

Under Anthony, tourism arrivals are now at record highs, increasing annually over the past four years. Construction is on the rise. New hotels are on stream. Unemployment figures are heading downward with the statistics department reporting 5,000 jobs in the last quarter of last year. Agriculture is in good hands under Moses Jn. Baptiste. Our sportsmen and women have found new hope with Shawn Edwards. The corrosive stench that had overtaken the Infrastructure Ministry has been sanitized by Philip J. Pierre. Later this year, two brand new hospitals will be commissioned.

This is what the UWP fear about Kenny Anthony; his steady hand guiding a group of committed and talented ministers.

Did I mention that Kenny Anthony is only one of three leaders to have led his party into electoral success in our country’s 37 years of independence? Yes it is easy to understand why the Chastanets’, Mayers and Joseph so want to see the back of Kenny Anthony!