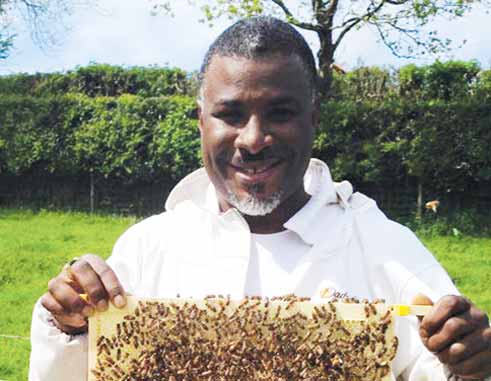 WHO would have thought that those tiny black and yellow bugs that fly around collecting pollen, making the sweet treat honey and oh yeah, stinging people, would be of any importance to us human beings?

Well, today’s FITC, Richard Matthias is on a mission to open our eyes and explain just how vital bees are to the very survival of the human race…Yes, I said our survival as a specie depends on these insects.

Matthias who is a resident of Ravine Chabot in Castries, left his cushy job at Sandals Resorts six years ago to take up a more humble yet self-satisfying and self-sustaining career as a bee-keeper/ Environmental Health and Safety Consultant.

Matthias also serves as a Director of Belles Ruches Apiaries where his role within the organisation is to manage its five apiaries around the island.

The organization also has a small honey process facility, which is maintained in compliance with Public Health Board and St. Lucia Bureau of Standards regulations.

With so many being completely oblivious to the works of bees, here is what our keen activist had to say in a bid to educate us all.

The VOICE: You do a job that not too many people acknowledge but is very important…bee-keeping. Firstly, please tell me about that particular occupation.

Richard: My motivation to be a bee-keeper is through my fascination for these amazing creatures. When we step into the world of honeybees (ApisMellifera), we are entering a multidimensional landscape of being. Bees can only be best described as a “world-enigma”.

Living with bees is not about hardware, hives and management techniques any more. It is ultimately about the survival of life on earth. The hive is at the core of the earth’s biosphere. Bees are agents of life, as they sustain the health and existence of vast numbers of plants and animals. Our food supply depends upon them. The multidimensional landscape of the hive presents an opportunity to step into a creative field of finding new ways of living. Bees ultimately can be an inspiration in these times of great turmoil and change.

The VOICE: Many people have not grasped the importance of these buzzy creatures. Please give us a look into the world of bees and enlighten us as to their value on this planet.

Richard: To the average person bees can be annoying, especially when we are trying to enjoy the warm weather and sunshine in our gardens but we certainly do need them. Primarily, they help to transfer pollen and seeds from one plant to another. This has multiple implications.

First, this cross-pollination contributes to 30% of our crops being grown for food, ultimately feeding the growing population. Secondly, if we did not have cross-pollination, 90% of our wild plants would most likely die. Research has estimated that more than 3,000 giga tonnes of carbon is stored in these plants. To put that into perspective, up until this point, humans have released slightly more than 1,000 giga tonnes of CO2 into the atmosphere. Imagine how much impact we have had on the planet already. Now if bees are wiped off the face of the earth, the effects on the planet would be potentially catastrophic. Bees are vital to the survival of mankind, and other creatures on the Planet. In the words of Albert Einstein “If the bee disappeared Off the Face of the Earth, Man would only have four years left to live”. Thus for the survival of our country St. Lucia, bees play an integral part.

The VOICE: What does it take to do the job that you do?

Richard: To be a bee-keeper it takes a lot of self-motivation and a willingness to intellectually evolve. To be a successful beekeeper you must truly love bees.

The VOICE: Now I understand that you quit the daily rat race to do this job full time. What was the attraction?

Richard: Initially my interest was to harvest some honey which is probably the most common reason for anyone keeping bees. The satisfaction of harvesting your own honey from your own backyard, produced by your own bees, is a rewarding concept. This then evolved to realizing the benefits of pollinating the many fruit trees and vegetables grown on the property. After my first year as a bee-keeper by hosting a few colonies of bees in my backyard the harvest was boosted spectacularly. As someone with a background in environmental, health and safety helping the environment was another primary reason. Being a Bee-keeper in my own small way I am helping to address the world wide decline in honeybee population. It is vitally important that humans look after bees as the consequences of a decline in bee numbers can be catastrophic.

Bee-keeping can provide a great source of satisfaction as you look after these fascinating and amazing little creatures. Many beekeepers find their activity helps them relax from the stress of daily modern life. The slower pace that needs to be adopted when around bees, transitions the bee-keeper into a much more relaxed state.

The VOICE: What are the perks of bee -keeping?

Richard: Being in the outdoors learning about your country, and the warmth of the people in rural communities. This alongside the achievement of maintaining and expanding the number of colonies one owns. Oh and of course the honey.

The VOICE: I can imagine that there are also a few dangers and pitfalls, what are they?

Richard: Before spending time and money setting up an apiary with several hives it might be wise to think about a few things, like:

Are you allergic to bee stings? When was the last time you got stung by a bee?

When taking up bee-keeping there should be no doubt in your mind that sooner rather than later you will get stung by bees. If uncertain, are you prepared to test your body’s reaction to bee stings? If you have not recently been stung by bees and don’t know how your body reacts, consult your doctor before you approach a beehive.

Keeping a beehive in your backyard does not guarantee the yield of honey every year. Are you prepared to look after your bees without any honey in return? Rather than harvesting surplus honey, sometimes you might have to feed your bees instead. There have been cases where new beekeepers with great enthusiasm have set up several hives only to discover along the way that their bodies had bad reactions to bee stings and with great disappointment, less than a year after they started beekeeping, they sold their hives and gear and gave it up.

The VOICE: Is this a job for anyone (with the exception of those who are allergic to bee stings of course)?

Richard: No. Bee-keeping is something you either love or you hate…no in between.

The VOICE: Do you receive any sort of support to do what you do like say from the government or private organisations?

Richard: I have received great support from the Ministry of Agriculture, IICA, TEPA, and indirectly from GEF via the national Bee-keepers Cooperative Mille Fleurs Honey Producers Coop Ltd.

The VOICE: Is it a concern to you the fact that bees and their importance is barely acknowledged in St. Lucia? If so, what do you think could or should be done to raise more awareness about the topic?

Richard: It is of great concern, but awareness is being brought to the forefront by a number of NGO’s. In the coming months the level of awareness will be higher as Mille Fleur Honey Producers Coop Ltd. will be making preparations to attend the 2016 Beekeepers congress in Tobago, and then to host the 2018 Bee-keepers Congress in St. Lucia.

Organisations such as GEF (Global Environmental Facility) have also done a lot of work building the awareness of the plight of bees by supporting a number of initiatives and groups including Bee-keepers with Disabilities based in Choiseul, Beekeeping at Bordelais Correctional Facility facilitated by “Act Now Generation” and the theatrical presentation, “The Bee-keepers Daughter” written by Floreta Nicholas and directed by Danielle Dubois.

The Ministry of Agriculture has been long-standing standard bearers for Apiculture in St. Lucia being represented by Extension Officer, Marcus Dennis, and Patricia Joshua of the Agri Processing Unit.

The VOICE: What would you say to people out there considering this field of work?

Richard: It’s great opportunity to make a second income, and also do your part to save the species.

The VOICE: Finally, with this opportunity to shed some light on the subject, what would you like to say to readers to get them to see the importance of bees?

Richard: Bees are the indicator to the welfare of our environment. It is key that citizens do all they can to pressure government to limit the use of toxic pesticides, fungicides and herbicides on the island. This will create an enabling environment for Bee-keepers to develop the industry as a viable alternative to bananas. Per the FAO in 2014 Cuba produced more than 7200 M/T of organic honey valued at US $23.3 million. St Lucia needs to emulate this success.