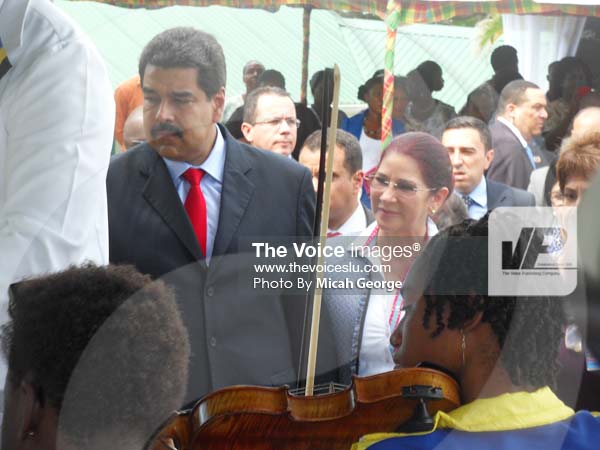 HIT hard by 75% plummeting crude oil prices over the last 19 months has been catastrophic for Venezuela. This is compounded by President Nicolás Maduro’s bad macroeconomic policy, socialist idiocy to placate the population, with phony hegemony that likewise buys friends and socialist regimes.

Since January, and following a decisive victory, the opposition Democratic Unity took 109 seats and now controls 65% in Congress. Opposition politician Henry Ramos Allup, a lawyer, four-term congressman and current Speaker of the National Assembly, who is 72 years old, presides over Venezuela’s single-chamber legislature, is seeking a democratic path to oust President NicolásMaduro.

Ramos Allup being the leader of the Social Democratic Action Party comes with concern to us, member of Venezuela’s “old guard” that alternated in power for four decades before President Hugo Chavez was elected president in 1998.

“We represent an alternative. We are not going to be anti-establishment, rather an autonomous legislative power. We ask people to watch us, to demand more of us, and keep an eye on what we do to make sure we honour our commitment.”

The word “social” together with being of Lebanese descent and other groups such as COPEI, PrimeroJusticia, Venezuela Project, Alianza Bravo Pueblo, Un Nuevo Tiempo and host of others popping up each day whenever basic services and goods are not available is very troublesome. Just image, leaving a “vacuum” to be occupied by any of these various groups with different political agendas?

In Venezuela the political, fiscal and humanitarian crisis is made worse by the inability of the political system, at present, to address the situation. Grassroots Chavismos are aware that the irresponsible socialist administration of Maduro’s measures to mess with the markets, and the largesse of cronies are over. Chavistas know and Maduro’s administration knows that, for Venezuela to solve this collapse, depends on his resignation or a constitutional amendment, a referendum [to revoke his term], or calls for a constitutional assembly.

The projections are that declining US oil production is expected to force oil price marginally up to US$50 per barrel by the end of the year. Venezuela’s fiscal break-even price is $117.50 per barrel. Crude oil is trading well below $30 per barrel. The economy contracted by at least 7% in 2015. Hyperinflation is dominant; the currency is worth less than a penny, while citizens carry large quantities of cash to buy basic goods that are in short supply.

External debt is estimated to be $185 billion, with implications for the Bolivarian Alliance of the Americas (ALBA) and PetroCaribe, the Mother Teresa of social welfare in the Caribbean region. Declining oil prices means Venezuela’s financing gaps have grown difficult to fund, while depending on oil exports for 96 percent of hard currency and 40-45 percent of the federal budget.

Some are of the opinion that an agreement with China might give Venezuela some breathing room to help spark economic liberalization and eventual revival while sitting on the world’s largest reserves. However, Venezuela already owes China $50 billion. The Financial Times is reporting Venezuela will earn less than$18 billion from exports this year, while it owes $10 billion in payments on the $120 billion in debt it has racked up. That leaves $8 billion for imports.

Ninety percent of the products made in Venezuela need foreign raw material. Domestic food production is inadequate for 30 million people who increasingly depend on food imports that are government controlled. On top of that, severe drought caused by El Nino has brought 18 of the country’s hydro-electric dams to critically low water levels. This means energy rationing and a further drop in working hours will impact on jobs and hard currency to compound deficiencies caused by macroeconomic imbalances.

In any event, two publications by Donald Trump come to mind: The Art of the Deal and the other, Think Big – Make It Happen in Business and Life: would have made a perfect gift for President NicolásMaduro, with his extreme economic weaknesses and erroneous economic decisions. At least he would have had second thoughts not to placate citizens and client states into complacency through wasteful social spending that has dug a deep financial hole, giving experts reason to conclude that default in 2016 is “difficult to avoid.” But it would be a surprise if an appeal is made the International Monetary Fund (IMF) as access to private loans dry up and Venezuela’s financial reserves are exhausted.

This means, as long as oil prices stay historically low, a power struggle looms and a new round of instability could keep growing.

The declared state of “economic emergency” would do best to address the political replacement of the socialist government ideology and, on the fiscal front, ease its spending policies and depleting foreign assets. Other measures include a voluntary bond swap or the option to sell increasingly limited assets, that of the country’s state-owned oil and gas company Petroleos de Venezuela (PdVSA). Transformation of gas and oil industries, privatise infrastructure and production sectors and a return to market economy.

The further contraction of imports would be painful but necessary to improve agricultural output and increase local production to help out the food crisis. Cash reserves on food imports would likely improve and help curtail a major source of social unrest in the country.

Maduro’s flamboyant optic in autocracy is poised to have ripple effects on sovereign debt repayments from client states in the Caribbean region. This is, however, likely to create new opportunities for real trade and commerce and the entry of new players, instead of dependency on Mother Teresa’s social welfare. A return to a structured and acceptable market economy is most advantageous.

For example, Prime Minister and Minister for Finance in Saint Lucia, Kenny Anthony, offered his thoughts on the wealth of talent in government employment, saying: “The public service has incredible talent, enormous talent; when you look across the region… and whether we are maximising the talent that is available.”

But how realistic is this when the answer lies in backward socialist government systems, outdated ideology, poor leadership and the lack of independent thought process and ability from the top. The expected result is a free for all, happy to receive grants and handouts and a non productive state enterprise that drains taxpayers.

Globally, the Argentine crisis of 2001 is seen as the barometer for Venezuela, in addition to the lessons learned in the 1990s when the Soviet Union ended its socialist nightmare. In return they rebuilt a new culture of production, efficiency and profits. Likewise, the Brazil and Mexico currency crises in the 1990s rebounded to fortunes relatively quickly.

Maduro and his cronies have made countless erroneous decisions trying to run the economy. Obviously, they can’t negotiate; they are boxed into a corner of weakness. It is time to go and allow Venezuela a fighting chance to diversify its economy, get back to market enterprise and a positive outcome.

But Maduro’s ideological bent, values and priorities that clamour for the memory of Hugo Chávez, are unsound rationales that are limited in turning ideas into policies and leading the country past socialist defacement.

Some Venezuelans challenge that if Maduro’s administration, his military and powerful Chavista congressman like Diosdado Cabello, Cilia Flore, EliasJaua had competing ideas and a strong commitment to advancement they would at least engage with proposals and viable alternatives to move Venezuela from a collapsed state. Many assert that the Maduro administration’s strong commitment to the status quo would find such efforts objectionable and refuse to discuss but instead suffocate the process and the presidency by virtue of their power and influence.

However, history has proven that the unthinkable can happen. Desperate times call for desperate action, as the assembly looks into scandals and corruption, even to investigate currency controls and embezzlement.

Venezuela has overshot both on the high side and on the low side. It is time to cut the denial and accept; it is time to look to the future.

(Melanius Alphonse is a management and development consultant. He is an advocate for community development, social justice, economic freedom and equality. He can be reached at: malphonse@rogers.com)