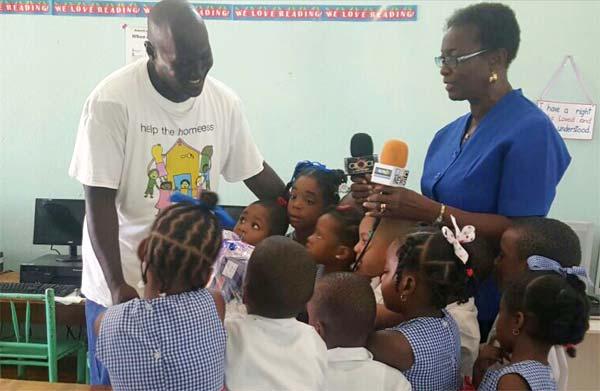 THE children with the help of parents/guardians and staff of the Kiddies Head Start Preschool and Nursery have once again shown their charitable side by making two donations that will indeed go a long way.

The donations were made on Wednesday in the form of a cheque for $500 to the Holy Family Children’s Home in Ciceron and a food hamper to the Feed The Poor Ministry founded by Gaspard Henry.

The funds were generated from a fun walk that the school held last year on Universal Children’s Day. An amount of $2,200 was sent to the sister island of Dominica ravaged by bad weather last August through the Chief Education Officer Marcus Edward. Another $500 was donated to the children’s home.

For the food hamper, the groceries were collected by the school from generous parents who had donated for another worthy cause.

The school’s administrator, Lucy Joseph said: “We had quite a lot of items left so we thought we should give to a worthy cause and so we donated them to Feed The Poor Ministries.”

Joseph sent out a special message of gratitude to parents: “I must thank my parents of Kiddies Head Start. They give so much and they are so selfless, particularly when we asked them to raise the funds during the fun walk. We just gave them a few sheets to solicit funding from friends and families and we were surprised to see the amount of money that they came with in one week, $2,700. It was beyond our expectations.”

Sister Antonia David of the Children’s Home accepted the cheque which will be put towards the well-being of the children housed at the facility.

She said: “We are very grateful for this initiative. It is really important for us to teach children how to value others and to reach out to them so I’m very grateful that the children at Kiddies Head Start are learning that value, how to reach out and help other persons especially children like themselves.”

Gaspard Henry was elated: “It feels like five million dollars because it came from the parents of the little ones and it really touched me to see that at this school, these acts of generosity are being manifested to different associations.”

He added: “Although I have received bigger presentations, this one means a lot to me.”