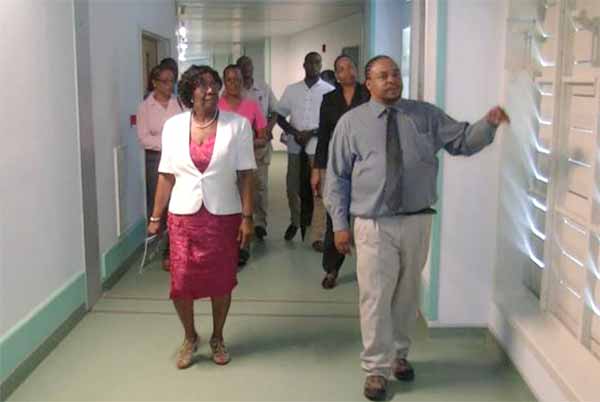 The tour allowed Dame Pearlette to see firsthand some of the key areas within the new hospital the paediatric ward, Central Sterilization Services Department, Physiotherapy Department, state of the art operating theatres, an expanded A&E Department, and a radiology department equipped with the latest in mammography and MRI equipment.

The Governor General described the facility as impressive.

“It is a very impressive building and my fervent hope is that we keep it functional. I can see that it is an expensive undertaking and to keep it running is going to be expensive. I am glad I had the opportunity [to tour] and I can say to Saint Lucia and the region that we indeed have a first class health facility.”

Commissioning Director for the New National Hospital, Dwight Calixte, said the tour marked the next phase of public awareness. Staff associations, the Chamber of Commerce, schools, the Medical and Dental Association and the media will next be invited to tour the facility.

“This is a national accomplishment and we want to encourage persons to come in and tour the facility, but we plan to manage the flow because we want to ensure that the facility remains intact before the opening,” Calixte said.

The European Union funded both the construction and equipping of the Owen King EU Hospital, an ultra-modern treatment and care facility, to the tune of EC$167 million.

The new hospital is the largest infrastructural project ever executed by the European Union in the Eastern Caribbean.

The hospital will be officially named on Sunday. The naming of the hospital forms part of the activities marking Saint Lucia’s 37th anniversary of Independence.