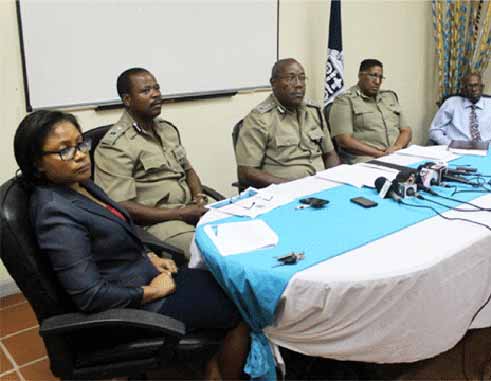 GAZETTED officers of the Royal St. Lucia Police Force who were hoping to move up the ranks will have to wait another time.

Interviews they were to have held with the Public Service Commission, as part of the promotions process, were postponed last week for the third time.

The Commission has not been forthcoming with any reason why the scheduled interviews had to be stopped and repeated efforts by this reporter to get someone from the Commission to speak on the matter were unsuccessful yesterday after several telephone calls to the Ministry of the Public Service.

The situation however is causing a strain in the police force which now has to deal with its most experienced officer, acting Commissioner of Police, Errol Alexander, opting to go on pre-retirement leave in April.

Alexander has announced his intention to retire after being bypassed for the position of Commissioner following the departure of former Commissioner Vernon Francois.

According to Alexander “95 percent of the police force’s senior core are in acting positions,” a situation that could negatively impact the general level of confidence or optimism of these officers..

With no word yet as to whether the situation as pertaining to the gazetted officers will be taken care of before Alexander vacates his post, it is left to speculation whether the police force, as it presently is, will be able to maintain its current level of discipline and performance after Alexander leaves.

The acting Commissioner, however, will be departing from the Force on a high note having implemented, with his executive, several initiatives that are bearing fruit today, one of which is the development of the crime strategy that covered the latter half of last year into this year and which police say has been bearing fruit.

But the suspension of interviews for gazetted officers comes in the wake of the PSC’s bypassing two candidates including Alexander who had applied for the post of Commissioner.

For the second time in three months or so the Public Service Commission has had to issue notices via the media calling for suitable persons to apply for the post of Commissioner of Police.

For reason/s unknown the process never went further. The Public Service Commission dumped it at that stage and elected to reopen the application process all over again. That part of the second process to find a full time Commissioner of Police for the Royal Saint Lucia Police Force ended 11 days ago today.

It was in mid-January of this year that Alexander was written to by the Public Service Commission informing him of the end of the first selection process. Then unknown to him the process was re-opened.

Talk of a conspiracy in the selection process for a police commissioner and the postponement of interviews for the gazetted officers who had applied to fill the vacant positions that were advertised has been going around, especially among the rank and file of the police force.