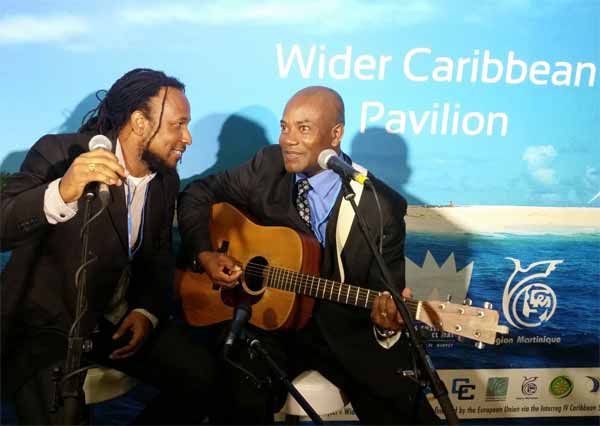 KINGSTON, Jamaica, —Earth Inspired, the new album released under the ‘1.5 To Stay Alive’ campaign last week ,has won the approval of its first listeners.

“We are excited and the sky is the limit,” said Claire Bernard, Deputy Director General at the Planning Institute of Jamaica, who was present at the launch, held at the Hotel Four Seasons in Kingston.

The ‘1.5 To Stay Alive’ campaign is the work of Panos Caribbean, the Caribbean Community Climate Change Centre, the Saint Lucia Ministry of Sustainable Development, Energy, Science and Technology; the Caribbean Development Bank, the Organisation of Eastern Caribbean States; the Regional Council of Martinique.

It has supported the region’s negotiating positions prior to and during the recent climate change talks held in Paris in December, with the focus, throughout, on ensuring that global temperatures are limited to 1.5 degrees Celsius above pre-industrial levels. This is given the catastrophic climate risks — including sea level rise and extreme weather events — to the small island developing states of the region.

With Caribbean players succeeding in having the 1.5 captured as one element of the target in the outcome document from Paris, the ongoing campaign is seeking to ensure no loss of momentum as countries look to ratify the new global deal.

To that end, it has, through a small grants window, worked with artistes Aaron Silk, Minori Russell and Pam Hall, to produce songs with the 1.5 message.

The trio, along with Lloyd Lovindeer, have produced four songs. All four artistes are all members of Panos Caribbean’s Voices for Climate Change Education programme, which has worked with the Planning Institute of Jamaica and other entities, including the Meteorological Service, to deliver climate messages.

The four songs are titled “Below 1.5, Keep on trying, Environment blue”s, and “For us to survive”. The campaign theme song titled 1.5 to Stay Alive and seven others earlier done under Voices comprise the album

The other titles are “Global Warning”,” Breath of fresh air”’ To the leaders; “Moral Duty”, “Free da Ghetto Youths”, “Mother Earth’s Cry”’ and “Our Planet’s Aid”. They feature the vocals of Boom Dawn, Fyah Juice, and Richie Ramsay, along with Lovindeer et al.

Meanwhile, Roy Teddy Miller, of BESS FM, himself has high praise for the new album and has suggested a place be made for the artistes on platforms like the upcoming Reggae SumFest and the Jazz and Blues Festival.