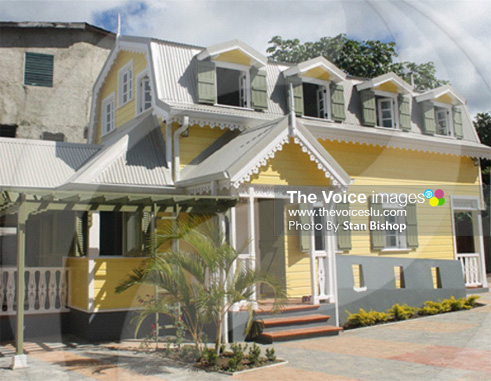 Share this post
THE former home where two of Saint Lucia’s most outstanding sons were born and raised will be reopened to the public later this month following a massive transformation.

For many people, 17 Chaussee Road, Castries is just like any other address. But for those familiar with the life stories of Nobel Prize-winning poet, Derek Walcott and his twin brother, playwright, Roderick “Roddy” Walcott, the location is of immense sentimental value.

The official opening of the newly-built structure will take place on January 24, two days before this year’s Derek Walcott Lecture will be delivered at the National Cultural Centre (NCC) and a day after the twin brothers’ birthdate.

A sod turning ceremony was held on January 17 last year for the restorative works on the Walcotts’ childhood home. The project – full name the Walcott Place & Grass Street Urban Enhancement Project – is the product of a collaborative effort spearheaded by the Saint Lucia National Trust (SLNT) in partnership with the Ministry of Physical Development, Housing and Urban Renewal.

While there were plans to rehabilitate the historic home for years now, the question of finances had stalled the project. That all changed when the Taiwanese government committed US$ 7.5 million in October, 2014 to fund the project.

Following last year’s sod turning ceremony, the old structure was torn down, making way for a new building that will feature a gallery and museum, an arts centre with additional exhibition space, a 150-seat training and experimental black-box theatre. The building is also expected to house art rooms, a reference library, gift and book shop, and restaurant with indoor and outdoor dining set within a courtyard.

It is hoped that the project will be declared a national cultural landmark as a centre of interpretation, inspiration, learning and celebration of the lives of and achievements of the two Walcott brothers, with nearby Grass Street residents receiving training in various income-generating skills that can form a niche market there.

Derek and Roderick Walcott were born on January 23, 1930 and grew up in the Chaussee Road home with their parents, Warwick and Alix Walcott. Their father, Warwick, died when they were toddlers.

When the Walcotts moved out eventually, the building was occupied by the Lithographic Press for some time before falling into disrepair. The government of Saint Lucia acquired the building in November, 2005 and later handed over to the Saint Lucia National Trust to ensure that it became part of the island’s patrimony.

When The VOICE visited the location yesterday, there were signs of workers putting finishing touches to the new building whose perimeter was still barricaded with plywood. Also noticeable was that the building’s new life retained key elements of its Victorian-style architecture.

Derek Walcott’s work has earned him the title of ‘best living writer in the English language’ won global acclaim, especially for his epic poem, “Omeros”, which, in part, played a key role in winning him the 1992 Nobel Prize for Literature.

Roderick Walcott, who died in March, 2000, played a crucial role in founding the St. Lucia Arts Guild in the early 1950s and is considered one of the founding fathers of Caribbean theatre. His works include the play, “The Harrowing of Benjy”, and the musical, “The Banjo Man”.

When asked to comment on the project in November, 2014, the Nobel Prize-winner said that while the project had taken a long time to finally be undertaken, he was nevertheless grateful that he had lived to see it become a reality.

“Our house is going to be rebuilt as a theatre project, which is very nice,” Walcott, who turns 86 this month, had said. “Although these things take time and it may sound as if nothing is happening, quite a lot is in fact happening.”

Meanwhile, the media launch for this year’s Nobel Laureate Week takes place today at Government House. Nobel Laureate Week, now in its 23rd year, runs from January 16-26 and is being held under the theme, “Celebrating Excellence: Transforming Lives”. The official opening of the Walcott Place is just one of the many activities on this year’s NLW calendar.