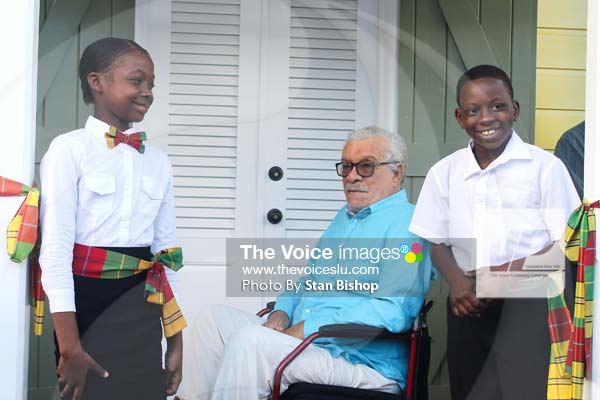 Walcott, 86, was in mixed moods – cheerful and weeping – when the doors to his newly-rehabilitated childhood home were officially opened.

Accompanied by his partner, Sigrid Nama, the acclaimed poet nevertheless seemed upbeat as people greeted him.

Walcott, who won the Nobel Prize for Literature in 1992, said he was “thankful” and “pleased” that part of his family’s legacy has been preserved through the house’s restoration.

The house, located at 17 Chaussee Road, Castries, was where the poet and his twin brother, Roderick, and sister, Pamela, lived with their parents, Warwick and Alix Walcott many decades ago.

During the opening ceremony, Walcott asked that the audience stand for a moment of silence in honour of his late brother, Roderick, a playwright, who died in March, 2000.

The official opening of the new colourful wooden structure came just a year after a sod turning ceremony was held at the famed house’s location near Grass Street, a small community of residents the new iconic landmark is expected to inspire.

Walcott House features writings, photos and other items of sentimental value, including an old Singer sewing machine, cited in Walcott’s poem, “This Trusted House”, the same brand used by his mother.

Family, friends, dignitaries and other well-wishers were present to hear Walcott express his gratitude to all those involved in the long and tireless efforts to restore the house that the “Omeros” author immortalized in his poem, “The Trusted House”, which includes the following lines:

a Singer, pedaled and steered the house’s human freight

and a great kannang tree lit every scene

up and down Chaussee Road. For all those who have been,

my eyes’ windows brim, as I unlatch the gate.”

“Our hope is that a good development programme like this can bring more attention from the world since we know that the beauty of the culture of a writer like Mr. Walcott is not only a treasure and pride of Saint Lucia but the entire world,” Ambassador Mou said at the opening. “The beauty of his art will be always treasured by everybody.”

In October 2014, then Taiwanese Ambassador, James Chang, presented to Prime Minister Dr. Kenny Anthony the first tranche of funds for the US$7.5 million his government had committed to the project. Rehabilitative works began soon after following discussions and involvement with key stakeholders, including Grass Street residents.

Walcott’s former Saint Lucia Arts Guild contemporary, Ruth Theobalds, described the new edifice as “a fitting tribute to the fame of the Walcott brothers”. The significance of the famed address, she added speaks of a place and time where the Walcott brothers’ magic had its beginnings.

“For many years, this was where their many discussions and decisions for plays had their origins,” Theobalds said. “This was also where the successes of the plays were celebrated.”

“This house, like Antillean art, as Derek puts it, is the restoration of the shattered histories not only of the Walcotts, but all of us who, in one way or another, have walked the road with them,” Dame Pearlette said.

The winner of the Walcott Schools’ Festival Monologue Competition, Haze-Ann Louis, delivered a riveting performance of an extract from Roderick Walcott’s play, “The Harrowing of Benjy”.

English poet, Glynn Maxwell, whom Walcott taught at Boston University in the late 1980s, recalled the life lessons he learned from his former professor, including the relevance of “it matters where you’re from”.

Prime Minister Dr. Kenny Anthony said the new building’s significance is limitless, adding that it proves that Saint Lucia celebrates the arts and those who keep it alive.

“This is a proud day for those who admire the arts and who have worked and produced with Roderick and Derek and those who follow in their footsteps to build their foundations,” Dr. Anthony said. “This is a proud day, too, for Grass Street and the families of its past and present.”

The Prime Minister said that despite criticisms generated by the quantum of investment into the project, excellence in the arts deserves to be celebrated as is the case in other fields of endeavour.

“We must believe that our people, our stories, our productions (and) our history is as noble as any other and is to be cherished as any other,” the Prime Minister said. “This house is our mustard seed and around it and through it we’ll grow, feeding off its inspiration. It has already produced world-renowned greatness in Derek and Roderick.”

Dr. Anthony added: “To the people of Grass Street and Castries (in general), you have the opportunity to look back on what this city has produced and find purpose and inspiration.”

Last Sunday’s opening of Walcott House is the first of three phases; the remaining two phases are expected to be completed within the coming months. With assistance from the Caribbean Development Bank (CDB), Grass Street will be extended and connected to Leslie Land Road which will, according to Dr. Anthony, “create a street of class and character so that the area can become more active and vibrant.”

By mid-2016, construction of the larger museum block of the project is expected to begin and will consist of three-storeyed building adjoining Walcott House. That new block will feature a ticketing booth, café, book and gift shop, and courtyard.

Derek and Roderick Walcott were born on January 23, 1930 and grew up on Chaussee Road. When the Walcotts moved out eventually, the building was occupied by the Lithographic Press for some years before falling into disrepair.

The government of Saint Lucia acquired the building in November, 2005, later handing it over to the Saint Lucia National Trust (SLNT) to ensure that it becomes a part of the island’s patrimony.