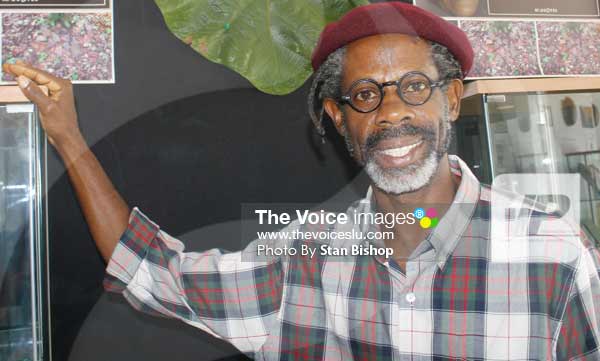 From Persecution To Preservation.

LAURENT “Jomo” Jean Pierre’s life has been one of hard struggle. His is a hard-fought lifetime of trials that has seen him standing up to the System in defence of his beliefs and paying heavily for it. Despite feeling downtrodden in the past, though, what the System could not break in him, it only strengthened.

But summarily, it’s been an exciting and journey and life, he says.

Born and raised for the most part on Peynier Street, Castries, Jean Pierre’s early education years were spent at St. Aloysius R.C. Boys’ Primary School. He later transferred to Laborie Primary School after the death of his mother. A stint at Vieux Fort Secondary School came later. Despite the many moves, he still knows where his proud heart is.

“My mother was from Laborie, so I consider myself a Laborie boy,” Jean Pierre tells me as he leans back on the sofa with one of his wide smiles. “That’s where I have all my childhood memories and where my consciousness peaked. But I’m lucky enough to have lived all over the island.”

Jean Pierre considers himself a product of both the Black Power and hippie movements which, he said, led to him being socially-conscious. He had read The Plain Truth magazines quite a bit at school.

He later read the works of Dr. Walter Rodney, Franz Fanon and C.L.R. James, all of whom had an influence on his life while he attended St. Mary’s College. Closer to home, poets John Robert Lee and KendelHippolyte had a huge influence on him also.

Another of his positive influences was his surrogate uncle, Joseph “Jomo” Primus, from whom he took the nickname. Soon people started calling him “the conscious Black yute” because he had a knack for hanging out with the so-called conscious guys at St. Mary’s College. He even found time to take up drumming and also took part in a play in Laborie when he was a teenager.

Jean Pierre became a Rastafarian back in the 1970s when that movement began to take root in the Caribbean. A spiritual search for identity and purpose saw him trekking throughout the island, which accounts for his wide knowledge of Saint Lucia’s many nooks and crannies.

He spent about six years in the island’s remote countryside, moving from place to place as he and his Rastafarian brethren ran away from the police. At the time, settling down in one place for too long only attracted persecution from law enforcement that did not take too kindly to Rastafarians. Nevertheless, one can only run for so long.

“I was part of the Mount Gimie raid and was arrested and imprisoned,” Jean Pierre said. “I spent just four months on remand. However, the police cut my dreadlocks, maybe as a way of showing us that they were in control. In those days, there was nothing like one’s human rights being violated or anything like that.”

A self-described “Christofari” (his word for a merger between Christianity and Rastafari), the 58-year-old dreadlocked bespectacled soul rebel says the study of life itself is just how he has lived his. Simplicity, acquiring knowledge and a close connection to the land, he tells me, are the main points of his daily routine.

“I like the intellectual and philosophical sides of things,” Jean Pierre explained. “I like to be in the realm of ideas, finding the meaning of things. That’s why I’m an anthropologist and botanist. I have a strong love for people and plants. I love the relationship between people and plants, which was one of the things that drew me into the Rastafari movement, the idea of being a naturalist and living a simple life.”

Jean Pierre’s higher education life includes him attending the University of the West Indies (St. Augustine Campus) before leaving to study botany and plant taxonomy. He later did a first degree in anthropology, minoring in biology and religion in New York. A Master’s degree at University of Kent came later, where his dissertation focused on the latanyé plant, from which local brooms are made.

“One of my biggest contributions to this country is a botanical survey of Saint Lucia: collecting, classifying and taxonomizing the entire flora of the island,” Jean Pierre said. “In doing so, I discovered a few new species, one of which was named in my honour.”

Known for his passionate calls for protecting the environment, Jean Pierre said food security, food safety and food sovereignty are increasingly indispensable factors, especially since climate change is sitting right on our doorsteps. He believes we need to plant more trees and adopt proper zoning methods when development plans are being rolled out.

That unwavering commitment to preservation has led to him working with the Saint Lucia National Trust (SLNT) for nearly a decade. He now serves as Historical Secretary at the Saint Lucia Archaeological and Historical Society. While the job titles change, he said, his relentless quest for knowledge and truth only bets better.

For the next few weeks, you can find Jean Pierre at the Alliance Francaise where he is co-organizing a month-long archaeological exhibition themed “Reassembling Saint Lucia’s Archaeological Fragments”.