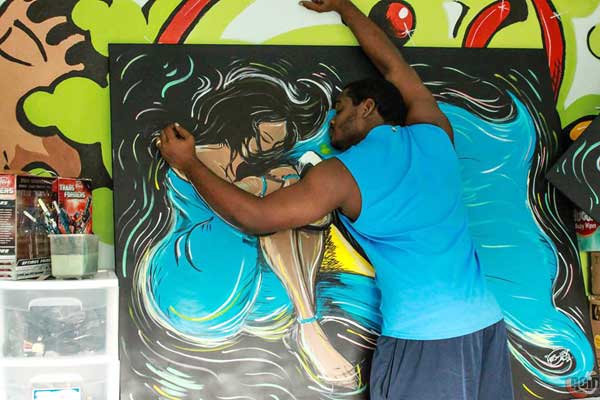 TALENT…you either have it or you don’t (although I think that everyone has some kind of talent be it positive, bad, annoying, disgusting etc. Many people just have not been able to tap into theirs yet.) But today’s FITC, the first for the New Year, has talent just bursting out of him.

Ted Sandiford is a hot commodity in St. Lucia with people from all across the island and the world over, clamouring for his services including local musical artistes like the reigning Power Soca Monarch Ricky T and reigning Groovy Monarch, Arthur Allain.

The 35 year Visual Arts teacher at the St. Mary’s College is a jovial and comedic but dedicated husband and father of four who spends his days spreading the joy of art and passing on his golden talent to the younger generation.

On the other hand, Sandiford who is also the manager of A.C.I.D Kreationz is a strict and business focused artist who is best known for the magic he creates with a pencil and paper to produce his numerous art pieces including his much loved characters, Cocoboy and Girard.

This is the one time, he said, he gets really serious as he is in his zone when he is creating his masterpieces and will get angry if interrupted.

Sandiford specialises in graphic designing, painting, animation, film making…. and the list goes on, but whilst he cannot pinpoint what kind of artist he is, he believes his true passion lies in animation.

Sandiford truly is gifted and his dedication and drive to improve on his craft is a perfect example that you really could make a living doing what you are good at and love.

The VOICE: When did you discover your passion and talent for art?

Ted: I really can’t remember. From as long as I’ve known myself, I’ve had a pencil in my hand doodling and sketching and stuff. I was always fascinated with cartoons and film so this is why I pursued my education in the United States and I’m still a student right now because it’s so expensive but I will get there. I mean, seeing art and students from different parts of the world actually helps you to become a better artist just because you’re exposed to different styles and you learn a lot from your mistakes. So I’m a teacher but I’m still a student.

The VOICE: At what point did you decide to do this professionally?

Ted: Well, I tried to run from art. When I was growing up, society looked down on art and people would ask “Why don’t you try to become a doctor, lawyer, teacher, etc.?” So I often saw art as a hobby. I knew that I had the skill but I often saw it as a hobby and I never took it on as in wanting to do it professionally…I actually wanted to be a writer, that’s another talent that I have which involves story-telling etc. But my mentor, Mr Luigi St. Omer saw my talent. I wasn’t even going to do art for CXC but he told me “You ARE doing art” and he put my name down…I didn’t ask for it. I left St. Mary’s and went to A-Level doing Management of History, Economics and History. I passed but my passion still stuck with art. When I left A-Level, I got a call from Mr. St. Omer. He said: “Mr Sandiford, I am retiring and YOU are going to take my place.” I had no say, he just demanded and there was nobody else. I started teaching at SMC in 2000 and I’ve been there now for 15 years but it had its advantages because I was actually teaching my craft and learning at the same time.

The VOICE: Tell me about A.C.I.D Kreationz

Ted: First it was just A.C.I.D where I made mixed tapes and so on and then it evolved when I started to do graphic designs and made it a part of A.C.I.D Then it came to the fine arts where I started to do it as a business. Then there was animation then films and because it’s so broad, A.C.I.D which means Artistic, Creative, Innovative, Dynamic, became A.C.I.D Kreationz

The VOICE: What goes into creating your different masterpieces?

Ted: Painting in itself, I have my seasons and so I cannot paint on demand. You can’t just tell me that you want this and that. I could do it but it won’t be my best. I do it when I’m in the mood and sometimes I just wake up and feel like painting…that’s why at my house, I have several pieces of canvas just sitting there so when I’m in my mood, I just get to it. When it comes to animation and cartoons, that is my true passion as well as film so I’m always ready to do that. Sometimes I will get an idea at 3:00 a.m. and I won’t sleep until I get it done.

The VOICE: Your reputation has been rapidly thrust into the spotlight and you are in high demand from many including the reigning Groovy and Power Soca monarchs, how do you handle this fame?

Ted: In St. Lucia, what is fame? I won’t regard this as fame, I’m just doing what I have to do. I see the music artistes as clients and they ask for a service and I do it without favouritism or affiliation.

The VOICE: You mentioned that you paint when in the mood, how do you handle being in such high demand?

Ted: I tell my customers how it is…if they ask for painting, I would tell them “Um, you will get it within the year” because my seasons for wanting to paint are weird. During the summer and other vacation times, that’s when it comes.

The VOICE: What inspires you?

Ted: Many things but a major source of inspiration is the joy I get when people see my work and I see their reaction to it especially my colleagues. In a way, it feeds me and I feed them with my creativity.

The VOICE: Between the digital art and the paintings, which one pulls in the big bucks?

Ted: Digital art. When I do a painting for $5000, it’s easier to sell or for example, do a logo for $200. The audience is still there but my technique is that I do all my art pieces digitally first and I will post them on social media and the most popular one, I will make a painting of it so I know that it will sell.

The VOICE: Overall, how much success has this talent gotten you?

Ted: Success is relative because success for me is not about money, it’s how far my art can reach and my art has reached as far as Germany and Bulgaria…the world is small but I have clients from all over. Right now I do caricatures of athletes.

The VOICE: You have shown that putting pencil to paper can bring one far, what would you say to the youngsters who don’t have a career path figured out but bare the same skills as you?

Ted: This does not only apply to art but once you have a passion, follow that, it’s what you’re meant to do. I believe that God gave everyone a purpose and the world would be boring if everyone was a plumber.