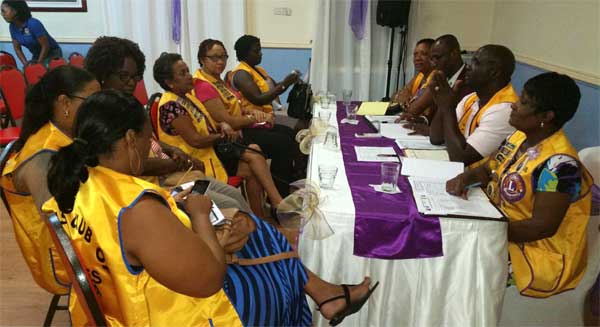 DECEMBER 2015 marked the end of the first half of the lionistic year (2015-2016), and in answering the challenge given by the District Governor to “take a stand and make it right through service”, the Lions and Leos of Castries say they ended the year in service.

In the first half the Lions and Leos engaged in a number of service activities including monthly feeding at Saint Lucy’s Home and RC Boys School on the fourth Sunday and at the Mother Theresa Home for the elderly on the Third Sunday. The Leos also did their share with the breakfast every first Saturday of the month.

In September in addition to collaborating with the Caribbean Youth Network in a beach clean-up in an effort to help protect our environment Castries Lions and Leos joined with Courts (Unicomer) in the OECS Reading Competition when each participant was presented with a gift basket comprising reading material and snacks, by the Lions.

In observance of World Service Day in October, and in response to Lions International’s request to undertake a Lions World Week of Service for Sight, the Lions and Leos joined in serving a hot meal and dessert to the clients who visit Wings of Love. This was followed by a discussion on the care of the eyes which was facilitated by an optometrist and Mr. Anthony Avril from the Saint Lucia Blind Welfare Association. The patrons were very appreciative of this discussion and indicated that there should be similar discussions focusing on diabetes and other ailments.

The Leos for their part observed World Service Day painting two classrooms of the Odsan Combined School. This gesture was well received by the principal, staff and students.

In addition to attending the first Zone (for Zone 3B Saint Lucia) meeting in October, the Lions and Leo clubs were audited by the District Governor, who said he was pleased with the work undertaken by the clubs. He, however, highlighted that there is room for improvement and urged clubs to conduct the community needs assessment so that they will be targeting the needs of the community.

Breast Cancer Awareness took on great significance for Lions and Leos as they “rocked PINK” every Friday in October – Fighting the Fight with one of their members who has been afflicted with the disease. They collaborated with Faces of Cancer and partnered with Super J in the Super J Yoplait Breast Cancer Awareness campaign.

November saw the two clubs “Rocking Blues – Fighting the Fight Against Diabetes” when friends, family and colleagues were invited to wear blue every Friday in November. The collaboration with the Saint Lucia Diabetes and Hypertension Association saw the Lions conducting diabetes screening and education at Cap Maison and the Leos mounting a candle lighting ceremony in recognition of persons living with the disease at the end of the moonlight walk for Diabetes. The Leos held a socacize session with the Sure Start Pre-School as well as a session for Lions and Leos promoting “Healthy Living and Diabetes”. November ended with the Lions and Leos attending the mid-year Conference in Grenada, when Grenada celebrated 50 of Lionism while the Leos held a fund day with the young men of the of the Boys Training Centre.

December saw the Leos observing International Leo Day with a week of activities culminating with a professional development day when they joined with the Leos of Vieux Fort and shared in a team building exercise. The Kids-In-Sight Team during their December visit saw 150 patients and dispensed 50 pairs of glasses in addition to undertaking 20 hours of surgery.

The Lions joined by the Leos began to spread the Christmas cheer with the hosting of a children’s party for the students of the La Resource Combined School. The over 120 children were treated with lots to eat and drink and each child was presented with a gift. The highlight of the party was the appearance of Mrs. Claus who distributed the toys. The Lions joined in the Digicel “Make a Wish Christmas” promotion and presented the 24 boys of the Boys Training Centre with a gift at the Christmas party hosted by Digicel.

The Leos followed with the annual Christmas lunch for the elderly, which this year was sponsored by Super J Supermarket, Frank B Armstrong, the Sports Club of the First National Bank and the Castries Lions. Grocery hampers were presented to families with visual impairment who were identified by the Saint Blind Welfare Association. The residents of the Mother Theresa Home were treated with their Christmas lunch and gift. The highlight of Lions service for December was on Christmas Day when the Lions and Leos served Christmas lunch to the homeless around Castries as well as the Residents of the St Lucy’s Home, The Mother Theresa Home for the elderly and the Cornerstone Half Way house.