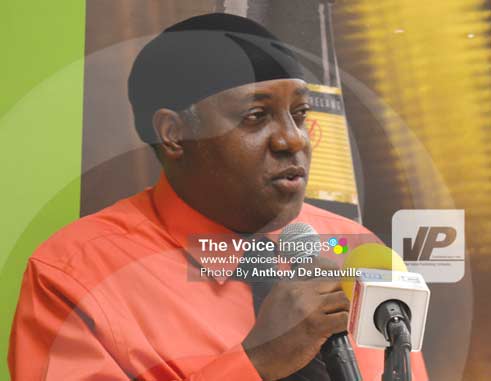 The news of McDonald‘s death came as a rude shock Sunday. The 42 year had given 24 years of service to sports journalism and broadcasting, most of it at Radio St Lucia.

Mc Donald collapsed at a hotel where he was staying for the weekend in Soufriere for the staging of the two double header quarter finals encounters of the Veterans Football Championship.

The news of his death from a heart attack was confirmed by members of the Blackheart Production Team who were with him at the time. David “Shakes” Christopher, head of Backheart said: “He was putting some work together when he collapsed. There was a doctor close by at the time and he immediately gave McDonald medical attention and then he was rushed to the Soufriere hospital, but subsequently died at around 11.30 a.m.”

At the time of his passing, McDonald was the 2nd vice president of the St.Lucia Boxing Association, Director of Blackheart Production Team, Host of the Popular Thursday Night “All Sports Open Line” and Host of one of the island’s leading Friday Night Shows aired from 7:00 p.m. to midnight “Reggae Vibes”.

Over the years Mc Donald had captured a number of sports personality awards. He also served as a judge for the annual sports awards, as a speaker at the same events, did commentaries during the Blackheart football tournaments and managed national boxing teams to regional and international events. His favourite International football teams were Liverpool and the Netherlands (Holland). On the local scene his team was Congorians which he saw defeat Vieux Fort South 1 – 0 on Saturday evening in Game 1 at the Soufriere Mini Stadium to advance to the semifinal round of the Veterans championship.

Christopher, President of the St. Lucia Boxing Association said: Brian was like a brother. He was a pillar of strength to everyone. I don’t think we can replace him. I don’t think St. Lucia in the next couple of decades will find another gem like Brian. He loved what he did, he was a passionate individual and he was dedicated”.

He continued: “You can always bet your last dollar on Brian when you ask him to do something, rest assured it would have been done. This will leave a void in the hearts of the Blackheart family, St. Lucia Boxing Association, the Mc Donald family, his media colleagues, RSL staff and the many sports fans”

St. Lucia Football Association President Lyndon Cooper who said he received the sad news upon his arrival at the George F.L. Charles Airport Sunday from Antigua, immediately travelled to Soufriere to lend moral support. He told THE VOICE: “We had a relationship that was based on mutual respect and confidence. I must say his loss is going to be irreplaceable because anytime the SLAA asked him to do anything pertaining to football he would have done it 125% and I was always assured that I could have gone to sleep and the work would have been done”.

Cooper added: “His loss now will be a blow for football especially”

The Saint Lucia Olympic Committee Incorporated (SLOC Inc.) in a statement yesterday, said it shared in the grief and sadness following the untimely passing of “one of the nation’s most prominent sportscasters/producers, and boxing administrators, Brian Mc Donald”.

It said: “It is with a deep sense of loss that the (SLOC Inc.) notes his passing as he has represented one of our affiliates, the local Boxing Association at (SLOC Inc.) events with distinction. Mc Donald was consistent in his reporting of activities undertaken by the (SLOC Inc.)

“His dedication to service at the state owned Radio Saint Lucia is well known, not only locally, but in the wider diaspora. His commitment to informing his listeners on events in the sporting world is unquestionable and his knowledge and authority of his subject earned him the respect of all his listeners”.