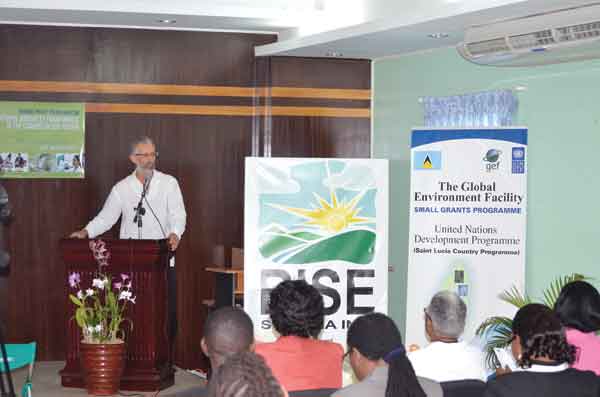 BUILDING on its track record for transformative social interventions with potential to change the life chances of Saint Lucians, RISE (St. Lucia) Inc has launched a new initiative in partnership with the Ministry of Sustainable Development, Energy, Science and Technology (MSDEST) and the Ministry of Agriculture, Food Production, Fisheries, Co-operatives and Rural Development.

The Good Food Revolution was unveiled this week to, Emma Hippolyte, Minister of Commerce, Investment and Business Development, representatives of the diplomatic corps, project partners and stakeholder groups. The guest of honour was Dame Pearlette Louisy, Governor General of Saint Lucia.

The Good Food Revolution Project seeks to create a national environment that promotes healthy food consumption, which is defined by RISE St. Lucia Director Dr. Stephen King as “food free of contamination”. Thus, he says, the project title is an apt descriptor of its intent to revolutionize food production by removing toxic chemicals and harmful GMOs from the Saint Lucian food chain, through a three pronged approach.

“The Good Food Revolution will be catalysed through policy and regulation development at the national level, at the farm level through training and access to technology and at the consumer level, through public education”.

The Good Food Revolution is a response to health trends which place chronic noncommunicable diseases at the top of the list of the primary cause of death in Saint Lucia. The island ranks among the highest in the world per capita for the incidence of diabetes. It is widely believed by health professionals that these trends are due in great part to the replacement from Saint Lucian diets of wholesome traditional fruits, root crops and vegetables from the local agricultural biodiversity, to highly processed imported options.

Jannel Gabriel, who leads the support team from the MSDEST explained that the success of the project is hinged on its ability to leverage synergies with a broad range stakeholder communities leading to a multi sectoral organic production and consumption policy. She cited two key outcomes of the Good Food Revolution Project in the context of their relevance to her ministry’s sustainable development mandate. In the first instance – facilitating the growth of markets for the consumption of organic food through market and social research and public education and in the second, development capacity to produce organic through the training of farmers and extension officers

The Project’s call to action to farmers, retailers and consumers is to “Grow, buy, consume organic”.