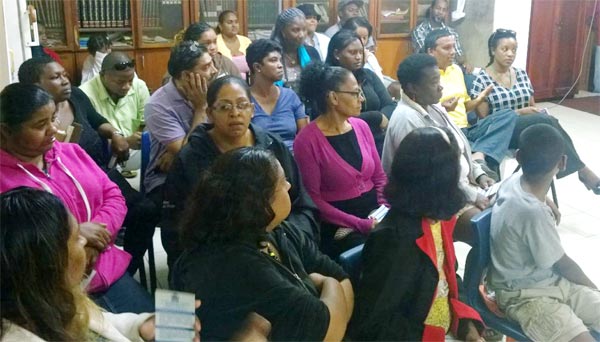 Press Relations Officer for the Forestiere Development Committee, Kelly-Ann Gajadhar informed The VOICE that for the past two months, Forestiere has been plagued by a number of burglaries leaving many community members at a great loss.

Gajadhar said the community members have lost not only money and other personal assets but endured a loss of security in their own homes as well.

On Wednesday evening, an emergency meeting was held at the Forestiere Methodist Combined School with the police officers, community members and the development committee. This meeting was well attended and the parliamentary representative Guy Joseph was in attendance.

She said: “Because of the frequency of the break-ins, in one instance five of them in one night, the Forestiere Development Committee reached out for assistance from the Police Force. Two officers from the CID department namely Officer Nile Trim and Officer Eldin Antoine and one from the Police Complaints Unit Sergeant Shervon Matthew agreed to meet with community members and brief them on safety tips, laws and regulations and solutions to help curb the situation.”

Sergeant Matthew was the facilitator for the night and according to Gajadhar, came well prepared to address the issue and also any concerns that the residents had.

Matthew prepared handouts with tips and also brought along a printed copy of steps and solutions one should take when dealing with burglars.

Sergeant Matthew agreed to get further details from successful watch groups and liaise with the development committee to successfully start such a group in Forestiere in the coming weeks.

Gajadhar said she was a victim of the burglaries herself. She said: “There were at least 10 other houses. There were cases where laptops, money, a tablet, and phones were stolen. For me I lost money and some parts I had purchased for my car. At most of the homes broken into, burglar bars were installed later. Some persons admitted that their premises had been invaded on more than one occasion..”

The PRO said thankfully, no one has been hurt in the process and although no one has been apprehended, the community has an idea as to who might be behind the break-ins.