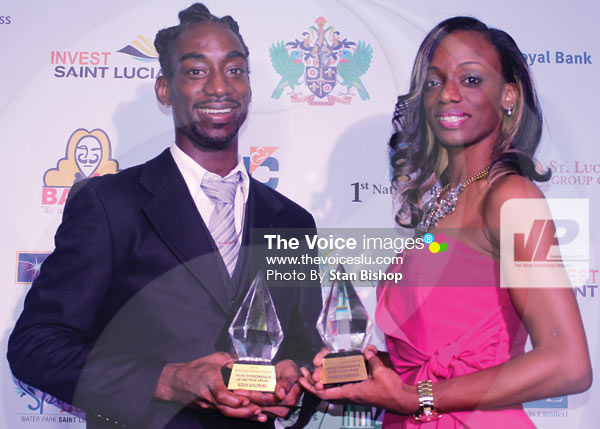 THE nominees were few this year but the winners certainly got their shine at the seventh annual St. Lucia Business Awards held at the Johnson’s Centre in Rodney Bay last Saturday evening.

Awards were given out in twelve categories, including the Lifetime Achievement Award. Twenty-two nominees vied for eleven competitive awards. In two categories, two nominees tied for awards while four categories fielded just one nominee apiece.

The event, organized by the St. Lucia Chamber of Commerce, Industry and Agriculture, attracted a potpourri of the movers and shakers in Saint Lucian business. The business suits and exquisite dresses seemed to embody the kind of high and professional standards the ceremony itself has been aiming at for the past seven years.

Despite the outward appearances, though, it is tough going for many local businesses, even with oil prices on the global market dipping sharply to around US$24 per barrel. Limited resources and other market forces can easily discourage even the most successful entrepreneur.

But the winners who received awards seem to be of a different calibre: in the midst of economic pressures, they say, their best performances have emerged.

Take the case of Mandisa Morrison and Keran Rosemond, who tied for the Award for Young Entrepreneur of the Year.

Morrison has used her marketing background to form, her own company Shoe Rehab, through which she collects old discarded shoes, repairs them and donates the end-products to underprivileged children. Some of her shoes have ended up in the annual Men in Heels contest as a means of raising awareness for cancer in men. Morrison’s entrepreneurial pursuits also saw her participating in the Caribbean Youth Entrepreneurship Summit in Barbados.

Rosemond, who hails from Ciceron, told The VOICE that he is determined to change many people’s perception of his beloved community. The twenty-three-year-old businessman owns his own company, Ali Rose Virgin Coconut Oil, influenced in part by his aunt who made the product during his childhood. Today, his product is available at all leading supermarkets and hotels and Rosemond is currently pursuing external markets.

Outgoing ‘Chamber’ president, Gordon Charles, listed the new Banking Act, the Citizenship by Investment Act and the increased local chicken quotas as “milestones” during the past year.

Charles said the World Bank’s 2015 Ease of Doing Business Report reflected a general improvement in Saint Lucia’s ranking. This, he said, has resulted in a sense of hopefulness regarding Saint Lucia’s participation on various committees and task forces related to trade, insolvency and free movement of goods.

Nevertheless, Charles said, the private sector needs to play an even greater role in changing the business climate for the better.

“Private sector participation is vital to the reform and implementation of policies which enable business, increase employment and promote investment and growth in Saint Lucia,” Charles said. “We do not believe that government should contemplate such things alone.”

Charles said the ‘Chamber’ does its best to remain relevant to its membership and the wider community, adding that “a fresh comprehensive strategy for achieving progressive change” was adopted by its directors earlier this month. With general elections likely to be held later this year, stability becomes increasingly important.

“Clearly, 2016 is a crucial year. In business, we need stabilization and growth. In politics, we need clear and rational thinking, especially as we enter the ‘silly season’. Therefore, we urge all parties to remain sane and sensible and to be cognizant of our current economic reality. We do not need short-term expediency to further erode our fragile economic sustainability.”

This year’s Lifetime Achievement Award went to Sir Julian R. Hunte for his sterling service that spanned many decades. Sir Julian, who received a standing ovation on Saturday evening, has served as businessman, politician, diplomat, and sports administrator.

“Let me say how relieved I am to receive this Lifetime Achievement Award in my lifetime and to avoid membership in the Dead Heroes Society,” Sir Julian joked.