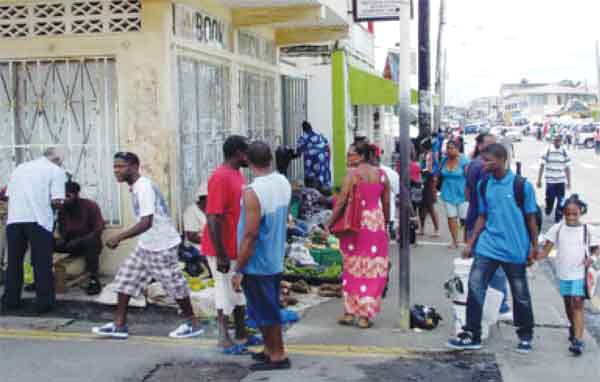 THERE are renewed calls for street vendors who operate in certain parts of the town of Vieux Fort be relocated to the Vieux Fort market.

This vexing issue was broached last week at a meeting between the Vieux Fort police and the business community.

At the meeting the business community was told by the police that the street vendors will be relocated to the Vieux Fort market following a recent meeting held with them.

But business people say they have been given such an assurance by the Vieux Fort South Constituency Council several times in the past, but the situation has gotten worse over the years.

Several co-ordinated efforts between the Vieux Fort police and the Council in resolving this matter have been unsuccessful. In fact the vendors have on several occasions made it clear that they will not vacate the areas which they operate. Whenever the police force them to vacate the areas where they operate, they would leave only to return a few days later.

“This is nonsense. It’s high time these street vendors be sent to the Vieux-Fort market. They are taking over the town…It looks like there are no laws in this country,” Auguste Martial told THE VOICE in an interview.

The vendors occupy some of the busiest streets in the town of Vieux Fort, obstructing the free flow of traffic on the sidewalks and into business houses.

The selling and cleaning of fish on Clarke Street is a particular annoyance to shoppers who have to be very careful when walking along the pavement to avoid their clothes being soiled with fish blood.

Several prominent business owners in Vieux Fort have registered their frustration with the situation with government departments in Castries, but to no avail.

Some of these business owners say the government lacks the political will to relocate the vendors.

“Is the government allowing this to happen just to avoid losing a few votes”?, one businessman asked.