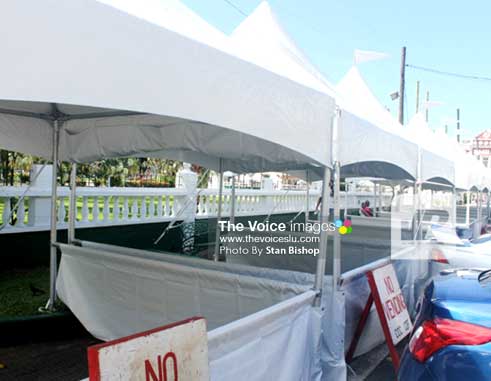 ACTING Commissioner of Police, Errol Alexander, has issued a strong appeal to vendors and patrons of this weekend’s Asou Square activities at Derek Walcott Square to exercise proper judgment and avoid breaking the law.

“Such people can not only be a nuisance to the public and themselves but can also be victims of crime themselves,” Alexander said. “Most importantly, where possible, vendors should not sell liquids in bottles.”

The Police Commissioner’s call for people to curb their disorderly behaviour that often stems from the consumption of alcohol came a week after the Director of the Substance Abuse Advisory Council Secretariat, Cyprian Yarde, issued an alert regarding the heavy consumption of drugs and alcohol during the festive season.

Yarde said his Secretariat was particularly concerned about the prevalence of teenage drinking, citing a recent study conducted among 13- to 16-year-olds which revealed that many students confessed to having their first alcoholic beverage before age 11.

While police say they continue to be vigilant to ensure that vendors at such events do not sell alcoholic beverages to minors, they admit that monitoring the situation proves to be a challenge because the police cannot be everywhere at all times.

Another concern for police, Alexander added, involves people hosting late-night events where loud music is played continuously. He said police will be doing its best to ensure that people who host such events have the requisite permission from the Commissioner of Police’s office. He explained that especially for security reasons, such permission needs to be obtained.

“If there are no police officers policing these events, there can be some serious repercussions for the owner of the premises. I hope they understand that they are breaking the law when keeping the events without permission from the Commissioner of Police,” Alexander stated.

Alexander also appealed to patrons attending Asou Square activities to be crime-conscious, protect themselves and not become vulnerable. He advised that they secure their personal belongings, especially in huge crowds where the possibility exists of thieves snatching wallets and other valuables exists.

Despite an earlier decision to host Asou Square activities for two days this week – Friday and Saturday – Alexander said that following consultations with the Castries Constituency Council (CCC) and the Ministry of Tourism, a decision was taken on Tuesday to extend the event into Sunday.

The reason cited for the one-day extension was that vendors were concerned that they would not be able to make a decent profit over a two-day period after being asked to shell out $460 for one of the new vending booths introduced recently by the CCC.

Alexander said the additional day of Asou Square does place a strain on the Force’s limited human resources. However, he said some level of compromise had to be made and the police will step up to the challenge of ensuring an incident-free fun weekend as best they can.

“Although this would be stretching our resources a little, I think that we need to meet people halfway, look at their concerns and try to see how best we can come to a solution where there is a win-win situation,” Alexander said. “So we are preparing for the additional day and are hoping that all will go well for the three days.”